Broadway on YouTube: Celebrating The Phantom of the Opera 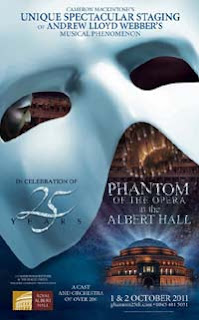 OK, I'm the first to admit that, long run or not, The Phantom of the Opera is just not one of my favorites.  I was decidedly underwhelmed when I saw the show the first time in the late 80's.  I tried it again with the National Tour, and finally found a Phantom I liked in Howard McGillin.  He was, and is the only Phantom I feared, and the only one I felt even a tinge sorry for.

I have always felt that the "love story" angle has been way over emphasized, while the thriller/horror angle of the story seems to get short shrift, especially some of the really cheesy staging that always seems to get giggles instead of gasps.  I mean, let's face it, his first murder is so out of nowhere and so clearly unreal (the dummy swinging from a noose always - all 6 times I've seen it - gets a noticeable laugh).  And there is that clunky chandelier more scary when it explodes before it ascends into the rafters than when it is supposedly "crashing" to the stage.  I mean just how tense is it when the cast has time to 1. notice it is unsteady, 2. gather across the stage, 3. ooh and ahh then scream that it is falling, 4. clear the stage completely, and 5. have stage hands in costume come out and catch it.  Even the conductor doesn't bother to feign fear by ducking.

Then there is the score, monotonous mostly with second rate opera numbers that I have always (even after listening to the CD) find to be mostly unintelligible.  For me there are three interesting numbers: "The Phantom of the Opera," "Masquerade," and "Music of the Night."  Beyond that...wake me up when it is over.

Still, there must be something to it.  I mean people have seen it hundreds of times.  It has played the world over, and is universally popular if not critically acclaimed.  A quarter of a century in two major cities is nothing to ignore, either.  I am, it seems, in the minority on this one.  And I am OK with that.

But I have to say that if I had only the three commercials circulating about the show to go by, I can definitely see the appeal.  It is amazing what some great photography and superb editing can make the show look fresh, exciting, tension-filled, romantic and lush.  In short, in just 30 seconds or 1  minute, the people who put these ads together make even me want to buy the DVD or get a ticket and see it again.

The Phantom of the Opera - The Love Story

The Phantom of the Opera - The Spectacle


And here is a longer ad for the forthcoming DVD of the 25th Anniversary concert staging at Royal Albert Hall.  That production, which will feature Sierra Boggess and Ramin Karimloo, will happen early in October, and the DVD will be released November 14th.

The Phantom of the Opera - The 25th Anniversary Concert/DVD

It should be noted that all three videos feature, primarily, the 2009 London Cast, despite the ads being for the Broadway and Albert Hall engagements.

And, yes, I'm sure this DVD will be on my Christmas list!  Who can resist it?


Rate this blog below, add your comments here, by email at jkstheatrescene@yahoo.com, or Tweet me!
Jeff
3.010
Posted by JK at 10:55 PM

Labels: Broadway on TV, The Phantom of the Opera, You Tube