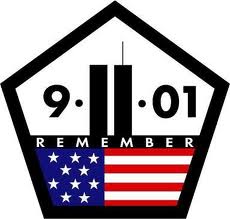 My mother can remember exactly where she was when President Kennedy was assassinated.  I can remember exactly where I was on September 11, 2001 when news came that the first tower of the World Trade Center had been hit by American Airlines flight 11.  We both can.  Having that kind of knowledge is something my mother is something she had always hoped her own children would not have to bear.  It is one thing in common that we both are not happy about.

But, as she always says, something good always comes out of the worst situations.  And it was just over a month later, in late October 2001, that my mother and I found our "good."

That I have a passion for Broadway and New York City is something everyone I know finds out, usually within minutes.  So when this tragedy happened, people I know immediately thought of me.  And every day for weeks, I am questioned:  "Are you ever going back to New York?"  "Aren't you afraid to go to Broadway again?"  "I bet you'll never go there again."  Remember that those days were filled with grief and sorrow, and also a lot of rumor, innuendo and fear mongering by the media; people asking me that was a natural thing.

But soon my fear - I'll admit I was scared like just about everyone else - was replaced by anger.  How dare my life, my freedom, my passion be ruined by terrorists?  And how could I let them win?  So many people died that day, and didn't we all owe it to their memory, to their sacrifice, to go on even better than before?

And so, plans were made to go to New York City.  I was determined to support the city and the Broadway community which were struggling now, just as they had supported me every time I went there.  My mother refused to let me go alone.  Off we went.

Anne Frank famously said, ""In spite of everything, I still believe that people are really good at heart."    She was right.  And nowhere on Earth was it more evident than that October weekend in New York City.  Good was definitely coming from bad, as New Yorkers struggled to regain normalcy.  The looks of gratitude that greeted us - returning tourists - everywhere we went was heart-warming and unifying. 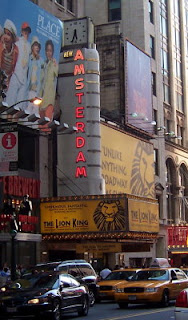 We saw that look on the face of the man who held the door open for us at Penn Station, who said to my mother, "Good morning, ma'am.  Welcome to New York!"  We saw it on the faces of the desk clerks - all three of them - who gathered at the desk of the Milford Plaza to greet us.  It was Saturday morning and the lobby was completely empty.  It was very eerie, but the staff surrounded us with appreciation and gratitude and mom turned to me and said, "I am so glad we are doing this."  "So are we, miss," said the desk clerk.  We were upgraded to a suite and given vouchers for meals.  We tried to say it wasn't necessary, but it was so clear by the looks on their faces that this was more than a gesture mandated by management, and we quietly accepted.

What were we going to see was my mom's first question.  "What do you want to see? "  " I really want to see The Lion King." "I am sure it is sold out, but let's go see about when tickets are available and we'll get them for as soon as we can."  Off we went to 42nd Street and the New Amsterdam Theatre.  "When do you have orchestra seats for a Saturday matinee?"  "Well, we have Center Row G this afternoon."  I was sure we heard wrong.  "What date was that?"  "Today, sir.  2PM."  My mother, always quick to recover says, "Aren't those the expensive seats?"  "Normally, ma'am.  But these are available at the regular price."  We looked at each other, all three of us.  The lobby was empty.  The man's face said it all.  "I don't care how much they are.  We will take them!" my mother announced.  The box office guy looked strange - part disbelief, part relief.

We literally skipped out of the theatre and walked up a practically empty Broadway toward our favorite breakfast/lunch cheap eatery, the Edison Cafe.  Like everywhere else, this place, usually crowded and bustling, was empty.  The service was terrific, the portions enormous.  We returned to our room to freshen up, and I flipped on the news.  A few minutes in came the news that surprised and scared me - Disney was the latest target rumored to be in the sights of the terrorists.  Disneyland, Disney World, and yes, Disney on Broadway were primary targets in the latest threats.  The picture was very clear.  "We are going anyway, Jeffrey," my mother announced firmly.  And we did.

Now the scene outside the theatre wasn't like it is today.  No huge crowds, no construction.  But there was a small line of people, who just like us, were defying the threats and going to see a Disney show no matter what.  It wasn't sold out, and the line to be thoroughly checked - wanded and complete-take-everything-out-of-your-bags bag checks was long.  Instead of complaining and being rude to one another, we were all resigned to this intrusion and kind of grateful that so much was being done to keep us safe.  The show was great. 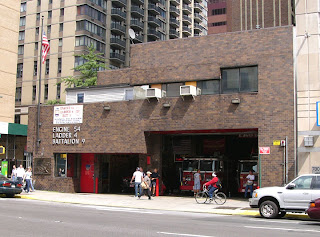 With that high as a kite feeling you get after seeing a great show, we left the theatre and went up 8th Avenue to find a place to eat before returning to our suite.  A few blocks past the Milford Plaza, we walked past the fire station, doors up, firemen sitting on alert waiting for the next call.  One of the stalls was empty of any sort of truck.  Just before the corner was a make shift memorial of pictures of the men from that station who didn't make it back from the World Trade Center.  There were some drying flowers on the sidewalk.  It looked as sad and beaten down as the men still manning the station.  Mom abruptly stopped.  Then she turned around, a look of resolve set on her face.  I knew not to say a word and to follow quietly.  I stayed behind just a bit, unsure of what was happening.  She spoke to one of the men, who called for another guy who came out of the office.  They chatted briefly, and my mother reached into her purse, took out her check book and wrote out a check, handing it to the fireman from the office.  He looked down.  Looked up.  Pinched his nose and started to cry.  I don't really know what happened, but the next thing I know, my mother and I are in the middle of a crushing group hug given by weeping men much bigger and stronger than either of us.  You couldn't help but be swept up by the emotion, as if that burst of tears was a relief of pent up feeling now some 6 weeks old.

Mom never told me how much the check was for, but I know it was substantial.  The fireman from the office said, "Are you sure about this donation?  I mean, you don't even live here."  And she looked him in the eye and said, "This is my son.  He comes here a lot.  And knowing that you are here in case he needs you is all the reason I need to give you that.  I wish I had more.  You've protected me and my whole family for years and I'll never be able to thank you enough for that.  Let's go, Jeffrey."

As we left, I looked back at their faces, full of gratitude.  Just like the guy at Penn Station, the clerks at the Milford Plaza, and the Box Office guy at the New Amsterdam Theatre.  Then, I looked down at the makeshift memorial at the smiling faces of those who would never return to their station or their families.  And I hugged my mom the whole way to dinner.