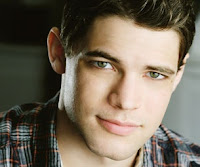 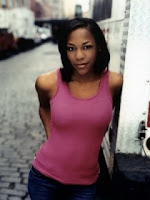 Can you identify any of these four people?  You should be able to!
(See the answers below.)

Recently, one of my favorite bloggers, Ken Davenport posted a piece lamenting the fact that Broadway is not marketed like other forms of entertainment.   He remembers collecting baseball cards of his favorite athletes and movie and sports posters adorning his childhood bedroom walls.  And wonders why people today aren't more familiar with the Broadway actors, dancers, etc. like they are with athletes and movie stars.  Why, he asks, doesn't the public know Broadway people enough to follow them from show to show, like we follow baseball players from team to team or actors from film to film.
I agree with him that Broadway as a genre is as well-marketed as it can be, and certain shows have been marketed to the point where they are a brand unto themselves.  And certainly, as a trip to the merch kiosks of shows like Wicked will show you some shows have really taken the lead in marketing beyond Broadway.  I know at least three young ladies (daughters of co-workers) who regard their Wicked t-shirts as status symbols.  Clearly, something is working. 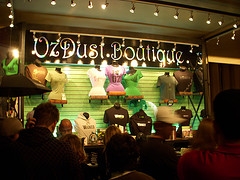 But I also understand what Davenport is saying.  Why aren't Broadway people household names?  He says he's not talking about "the Patti LuPones and Nathan Lanes."  But let's start there.  People in the general population know Ms. LuPone from her TV series, Life Goes On, and people know Nathan Lane as the voice of Timon the meerkat in The Lion King film.  Do they know they are both critically acclaimed, Tony Award-winning actors?  How about Angela Lansbury, arguably one of the greatest Broadway stars to have ever graced the stage, who will forever be "the Murder, She Wrote lady."

As I sit here typing and watching Dancing with the Stars, everyone on it has a label - fashionista Carson Kressley, activist Chaz Bono, actor David Arquette.  As I recall past seasons, I can think of exactly ONE "star who danced" with the label "Broadway star," and that was Marissa Jaret Winokur.  Now, I realize that the "stars" are labeled according to what they are best known for, but Florence Henderson, Cloris Leechman and other contestants on that show have had Broadway experience, but you'd never know it.

By virtue of the fact that you are reading this, you are probably not the one who needs to read this and blogs like it.  You and I know things like RENT star Annaleigh Ashford has been in Legally Blonde and Wicked.  We know that John Selya and Cody Green are Twyla Tharp dancers, and that Joe Mantello not only directed Wicked, but also Take Me Out and Assassins and won Tonys for both.  We also know that he is an accomplished actor from Angels in America and The Normal Heart.  Granted, only those of us truly obsessed may know Danny Berstein's resume and are proud to have seen not only Gavin Creel, but Jay Armstrong Johnson as Claude in Hair. 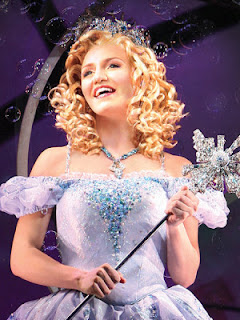 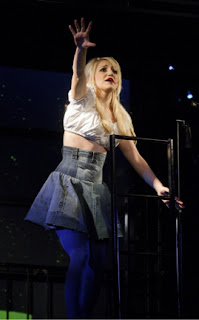 From Glinda to Maureen: Annaleigh Ashford

But there is no reason in the world that TV viewers shouldn't know that Katie Finneran star of a new TV show is a Broadway star first.  Or that Glee employs A LOT of Broadway actors.  Couldn't it be "This week on Glee, Jane Lynch goes head to head with Broadway stars Idina Menzel and Cheyenne Jackson"? Just making that label more common, more regular, would go along way.  Why can't characters on TV shows go to the theatre sometimes?  You'd think Modern Family might have Julie Bowen and Ty Burrell take the kids to a show.  God knows they leapt on the let's make fun of Spider-Man bandwagon fast enough.  If Lucy and Ricky could take in a performance of The Most Happy Fella,  why didn't Ross and Rachel go see Miss Saigon?

Of course, there is a logical reason that Broadway may not reach the masses across the country.  Music, movies and TV, and sports are "transportable entertainment."  There can be 2,000 performances of Star Wars at a time, and millions of homes can see one TV show at a time.  Yes, there are National Tours, but what does that mean?  Four performances of Jersey Boys at a time?

But Broadway CAN be a national presence.  It used to be.  Late night talk shows, appearances on The View are great and a step in the right direction, and part of a long tradition of such appearances dating back to The Ed Sullivan Show.

A couple weeks ago, my friend Mike commented on my blog about how The Book of Mormon might just be the first American theatre phenomenon in years.  He said, and he's right, that shows might be struggling to be heard over the massive din created by social media, the Internet and the like.

I say, then, that Broadway needs to start being a lot louder.  And let the noise begin TONIGHT on the Dancing with the Stars Results at 9PM, when Harry Connick, Jr. offers up the title song from his new Broadway show, On a Clear Day You Can See Forever.

Rate this blog below and leave your comments here, by email at jkstheatrescene@yahoo.com, or Tweet me!
Jeff
3.022
Posted by JK at 12:00 PM