Its trek to Broadway has become the stuff of theatre legend at this point.  What no one counted on was that the show would become a critical and popular hit.  And so a "limited engagement" became a joke as the grosses went through the roof and the show sold out night after night.  Add the unbelievable word-of-mouth by the "Fansies," and a hit and an open run. Now we have the Original Broadway Cast Recording of one of the biggest hits of the season, Disney's Newsies: The Musical. 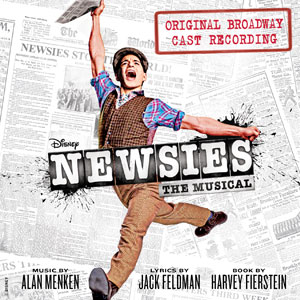 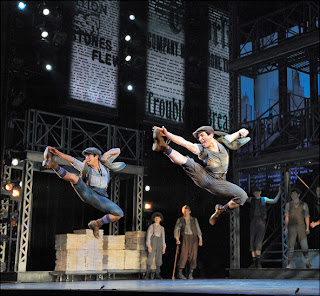 The Booklet:  Once again, the folks over at Ghostlight Records has done a bang up job in the presentation of one of their titles, creating another keepsake cast recording.  What I like the best is that the booklet retains the feel of the show's logo beyond the cover, with the pages having a news print background and the sing titles in "type set" font.  You'd think this would make the pages unnecessarily busy, but that is not the case. Included is an essay by Bob Tzudiker and Noni White which tells the history of the production, the movie upon which it is based, and the historical events upon which the film was based.  The full lyrics are included, making several of the songs all the more interesting for the understanding of the Newsies.  Finally, there are several full color production photos, many of which are not the ones frequently used in the media.

The Sound: The clarity of this recording is superb.  The vocals, in particular, are pristine, which really adds to the enjoyment of the songs outside of the theatre.  Many times, the staging and the songs require that the cast sing over each other, which is fine live and in the midst of the spectacular dancing.  But listening to the lyrics (by Jack Feldman) without the visual is all the more interesting because now you can hear from each character.  The details are pretty cool.  But the real treat is hearing how really lush and detailed the orchestrations by Danny Troob are.  He has taken Alan Menken's music and makes all of it, old and new, sound both contemporary AND historically accurate.  The 18-piece orchestra under the baton of Mark Hummel sounds great, be it during a rousing anthem, a moody ballad, or zesty dance number. 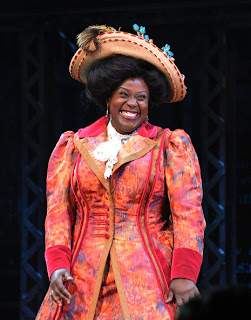 The Songs: I've been a fan of the music of Newsies since the film came out, despite the short comings of that version of the story.  They are very well represented here in the stage version, particularly the lovely "Santa Fe" which now really makes sense as it is presented in the show.  My other film favorites include the big, full cast numbers, "Carrying the Banner" and "King of New York."  The best overhaul for the stage version has to be "Seize the Day," which manages to have some emotional heft to it, even just listening to it.  The nicest surprise of this recording, though, are the 8 new numbers added for the stage version.  I say "surprise" because a couple of them don't make the much of an impression in the theatre, but are very good here: "That's Rich" as sung by Capathia Jenkins is pretty good here, but left me flat at the show.  The new numbers fit in seamlessly, each done in the same musical idioms of the turn of the last century.  With half the score new (and written specifically for the theatre) and of such quality, it is no surprise that the score is Tony-nominated. 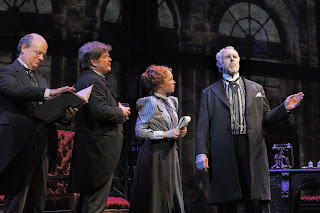 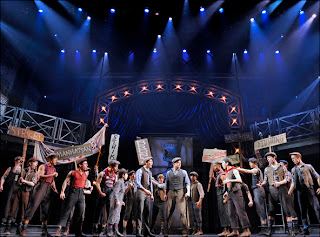 The Stand Out Performances:  The cast of the show is uniformly good both on stage and on this recording.  The Newsies have distinct characters that even come across here - Andrew Keenan-Bolger's Crutchie is nicely rendered in "Santa Fe" and in the other group numbers.  Tommy Bracco's Brooklyn boy "Spot Conlin" is a great in "Brooklyn's Here."  John Dossett's Joseph Pulitzer is a creepy villain (you can almost picture him twirling a bad guy mustache) in the catchy "The Bottom Line."  The three leads are exceptional on this recording.  Ben Fankhauser lends a sincerity and a rallying the troops quality to several numbers, most notably in "Seize the Day."  Broadway debutante Kara Lindsay has a lovely voice and manages to be both a Disney gal and stage belter.  Her "Watch What Happens" is so rousing that you almost want to take to streets and cheer for women's rights, and her love duet, "Something to Believe In" is believable and sweetly romantic.  Of course, she is singing that number with a real king of New York, Jeremy Jordan, who proves again that he is no flash in the pan.  His powerful voice is matched well with his heartfelt acting, particularly in "Santa Fe," which should have you swooning. (The acoustic bonus track version is equally impressive.) 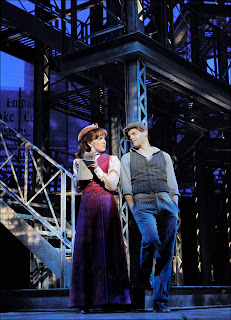 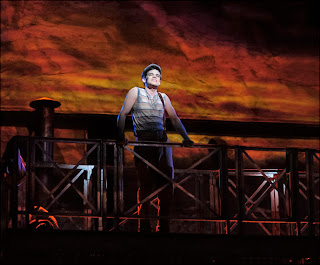 My only qualm with the CD, as with the production it preserves, is that there are several group numbers, and all of them have the same earnest intensity.  Seeing it live, with all of the spectacular dancing and staging, breaks it up in performance.  But hearing them on CD, back-to-back, brings up the hint of monotony.  Don't get me wrong.  The songs are beautifully sung and genuinely sincere.  Some variety in tone and a tad less unison singing could improve an already terrific score.