The Jackets - The JKTS Awards and Broadway Show Jackets

The following is what happens when you are on Tony Award overload...

Last year, I called them the "Awards That the Tony Awards Forgot."  Zzzz!  This year, they are the JKTS Awards.  More official sounding, and easier to Tweet.  In fact, fans of different shows have been Tweeting about it all weekend - THANK YOU!  Anyway, one of you Tweeted about the "Jacket Awards" - and after verifying that you meant JKTS Awards - an idea was hatched!

The Tonys are really The Antoinette Perry Awards, right?  So The JK's TheatreScene Awards can be the "Jackets," right?  When they get really cool, we can call them the "Jackies"!  Maybe not...

Well, the Jackets is just fine with me because it reminds me of something in the not too distant past.  The show jacket!  Yes, back in the day, when the weather got colder, the show jackets came out.  Everyone in a Broadway show would start wearing what was actually a varsity jacket with their show's logo embroidered on the back.  When you are a drama geek in high school and see all the "cool kids" wearing their varsity jackets at school, with no hope of getting one of your own, you get jealous.  But going to New York City and seeing real actors in cool show jackets gave me hope that I could be cool one day, too.

Here's a great explanation of the bygone tradition on the Great White Way by fellow blogger and Godspell producer, Ken Davenport.  Click HERE. 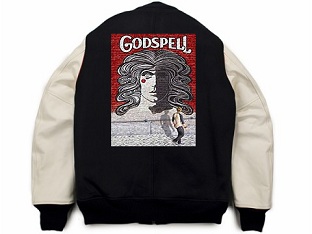 ANYWAY...  Take a few minutes to vote for the JACKETS!  Click HERE!  The polls close on Friday, June 8th at 8PM!  Tell your theatre-loving friends! 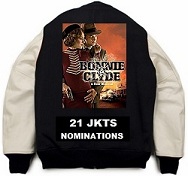 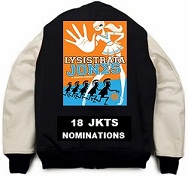 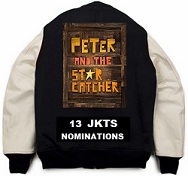 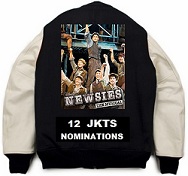 The Other Nominees (with 3 or more nominations):

REMEMBER...  Take a few minutes to vote for the JACKETS!  Click HERE!  The polls close on Friday, June 8th at 8PM!  Tell your theatre-loving friends!