TheatreScene Chat: An Interview with Claybourne Elder, Part I 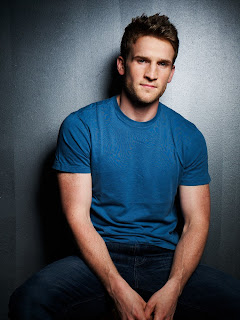 I am so thrilled and honored to bring you this latest interview with one of Broadway's brightest up and coming stars, Claybourne Elder.  After making a name for himself in regional theatre (which he continues to do), he came to New York and landed a dream role in the off-Broadway production of Stephen Sondheim's Road Show, and has partnered with director Moises Kaufman in productions of Into the Woods and Tennessee Williams' One Arm.  He was honored with a Drama Desk Award nomination for his role in the latter.  For Broadway audiences, he is probably best known for playing Buck Barrow, brother to Clyde Barrow (Jeremy Jordan) in the musical Bonnie and Clyde.  In part one of this interview, Elder talks about that show, the fan support and taking to social media.  He also talks about what he considers his greatest theatrical experience to date, playing a boxer in One Arm.

Jeff Kyler (JK): Thank you so much for taking the time to chat with me, Clay.  First of all, congratulations on making your Broadway debut in Bonnie & Clyde.  Despite its short run, was your debut everything you dreamed it would be?  What about opening night?

Claybourne Elder (CE):  Thank you so much! It was a huge thrill to work on Bonnie and Clyde, not only because I loved the show and my character, but [because] the company was amazing. Many of us had been working on the show for 2 or 3 years together and had gone out of town twice. And because both of our out of town runs happened in the fall over the holidays we had spent 3 Thanksgivings and Christmases (and Channukahs) together. So by the time our Broadway opening came, it was a little like graduation and a birthday and a wedding. I’ve never had so many flowers in my entire life, haha.

JK: You played Buck Barrow in the out of town try out in Florida.  From what I’ve read, the show was a critical and popular success there.  Were you (and the rest of the company) surprised at the somewhat colder critical response in New York?  When I saw the show, right after it opened, the place was packed and the audience was very into the whole show.  Were those weeks after opening difficult or was the audience response motivational?

CE: You know, the strange thing about our little run of Bonnie and Clyde was that we were never really that empty. Critics have their opinions, but the public support of our show was really strong. But because we had all been working so long and hard on it together, we were all just happy it happened. It was really sad to see it close, I won’t lie, but better to have loved and lost…right?


JK: Were you aware of the mostly positive fan response in social media circles?  Surely you know that theatre bloggers and message board posters are the most critical, hard to please, and yet those same people (myself included) still talk about Bonnie and Clyde as being one of the better experiences of last season.  Why do you think there is such a disparity in the reactions of the critics vs. the public?

CE:  That’s such great news!! I don’t think I was really aware of that!! I try to stay far away from response to the show when its going on. Some people like to read everything written about the show, but I’m just not one of those people. So its great to know that fan and social media response was so great! I did have a BLAST Tweeting during the show with fans. I love it when people Tweet at me with questions and stuff; it's fun to know people care about what's going on in the theatre world and I like providing info!

JK: Speaking of social media, how much of a role do you think it really plays in promoting shows, actors and creative types?  Some producers seem to really embrace it, while others seem to remain firmly in the old school ways.  As an actor, how does having people’s opinions being so “in your face” effect you?  How important do you think social media is in getting yourself out there and recognized?  Is it all about self-promotion for career advancement or an exercise in ego?  Or both?

CE: Well, I never had used my Twitter account much until Bonnie and Clyde, when my cast mate Tad Wilson told me how much fun he has with it and told me that I should really start out. I started Tweeting funny things that had happened backstage, etc., and started getting more followers. I don’t like to think of it as a promotional tool, really. That seems a little cold, perhaps. I mean, I always Tweet about concerts I’m doing etc… but the difference is that people who choose to follow my Tweets want (hopefully) to hear that info. I also Tweet a lot of really stupid stuff about my garden or silly things that happen in the city.

JK:  Before we leave the subject of Bonnie and Clyde, here are a couple of questions for you, submitted by readers of this blog.  First up, is BnCBwayFan, who asks:  [What was your] favorite “Buck” moment in B and C?

CE: Getting baptized. In each of the three productions they tried their best to make this moment happen. First in La Jolla they used a hose, which a stage hand would spray me down with as I laid down to be baptized. A chilling surprise every night. Then at the Asolo they used buckets of water which several stage hands would throw at me simultaneously. The first time we did it in tech we had to stop because everyone on stage looking down into the hole busted out in uncontrollable laughter, but the audience never knew and it got the job done! When I finally got Buck’s Jacuzzi, as I called it, in the Broadway production it felt like we’d made it. During the tech I swam around in the warm water, it was lovely.

JK:  And Jackie F. wants to know: Just how amazing was it to work with Jeremy Jordan?  Laura Osnes?  Melissa Van Der Schyff?

CE: I love those guys. Jeremy just asked me to be a groomsman in his wedding, Laura brings over her dog for play dates, and I can’t say enough about Melissa. She is my best friend. We’re constantly scheming up ways we can work together. We just did a reading of a new play across from each other J cross those fingers. We like to think of ourselves as one of those old time comedy duos. 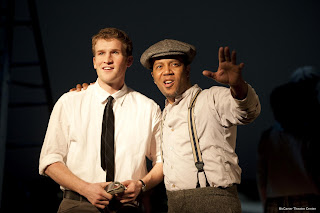 JK: Throughout your career so far, you’ve gotten to play several “real-life” people - Charles Lindbergh (First Flight), Buck Barrow - and characters based on real life people - the one armed boxer, your role in Road Show.  How do you prepare for these roles?  Lots of research?  Working with a dramaturg?  Is it much different than preparing for completely fictional roles?  How so?


CE: These are my dream roles! My degree is actually in Dramaturgy, and so whenever I get cast in roles based on reality I start to drool a little at the thought of all the reading I’ll get to do. (Wow, I just geeked out A LOT). I love diving into the history behind characters and what could have influenced them. Everyone comes at their character creation process from a different angle, and mine is of the Actor/Dramaturg. So, as I’ve sought out experiences that I feel I can bring the most to, those are usually the ones that I end up working on. 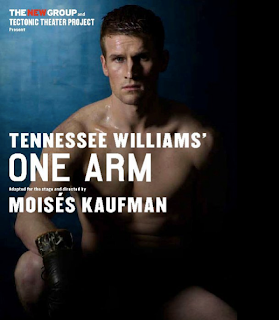 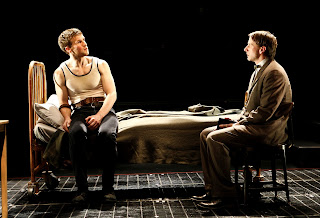 JK: You made quite an impression with critics and audiences alike in the Tennessee Williams play One Arm where you played a one-armed boxer.  Congratulations on all of the accolades.  Even describing it sounds exciting and challenging.  How difficult was the role?  What were the challenges of playing a one armed guy, especially a boxer?


CE: One Arm is by far the most difficult thing I’ve ever put myself through and definitely the most rewarding personally. I trained for 2 hours a day to get in shape, I worked with a boxing instructor and a dialect coach, I, of course, read up on the period and boxing…it was a mountain of work. I became a monk for the show for several months. But I loved the work so fiercely that it wasn’t a chore. The story was so beautiful and redemptive. There are many times I have wished for just one more performance of that show. Most people know me from my work in Bonnie and Clyde, a show that I’m also incredibly proud of, but this little show that only ran for a few months is so dear to my heart.

Part II of this interview will post next Thursday, July 5.  Come back to find out:
READ PART 2 NOW!  CLICK HERE!

(Photos of Bonnie and Clyde by Nathan Johnson. Other photos provided by Mr. Elder: TOP: by Andrew Parsons; BOTTOM: photos from One Arm and First Flight)