Americans are a trendy people to be sure.  Things are "in" then "out" at a rapid clip.  Though somewhat slower than most areas of our culture, Broadway is no stranger to such trends.  Over the past couple of seasons, there has been one major trend in shows making it to the Great White Way: religious themed musicals.  And over the past week, it is clear that the trend is at an end; audiences, it seems, have had their fill of God on the boards. 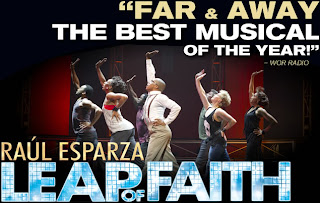 Leap of Faith
The God Connection: Slimy tent revival "preacher" seeks to bilk another down-on-its-luck town for its last pennies.  "Preacher" meets sheriff, beds her, has epiphany in field.  Finds God and happiness.
Church Is Out: Word of mouth (and impossibly cheap seats) weren't enough to keep this going in the face of particularly vicious criticism from the press.  And an impossibly sexy over-the-title Raul Esparza wasn't enough, either.
In The End: Closed May 13, 2012 after 25 previews and 19 performances 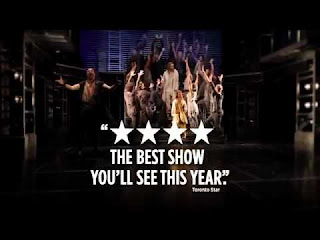 Jesus Christ Superstar
The God Connection: It's about the last days of Jesus Christ. This time with a foreboding tone - 2012 is The End of Days, blah blah blah.  Throw in some blue satin and a nagging Mary Magdalene, and, apparently you get the production of the show its authors always dreamed it could have.  Right.
Church Is Out: Have we finally had enough of this dated, yet always "of our times" show?  Wasn't it on Broadway a year or two ago?  Or maybe it just wasn't the "arena rock style" blow out that was promised.  Or maybe is just a tad too slick?  I'm going with a little bit of all of the above.
In The End: Producers warn of a July 1 closing without a surge in sales.  When it closes July 1, it will have played 24 previews and 116 performances. 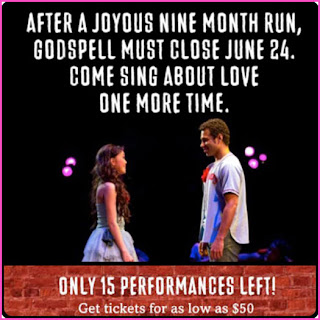 Godspell
The God Connection: It's about the last days of Jesus Christ. This time with a playful tone - 2012 is The End of Thinking, have fun while you can, blah blah blah.  Throw in a vacuous smile, a baseball jersey, some fake carnations and a nifty mid-stage pool of water, and, apparently you get the production of the show its authors always dreamed it could have.  Well, it was timely, fun and creative.  But maybe too silly for its own good.
Church Is Out: Audiences seemed to love it.  They all but gave it away for free.  And still nobody showed. The built a Beautiful City and no one saw it.  I'm not sure why.  OK, maybe I can think of a few reasons, but why kick a good guy when he's down.
In The End: The Tonys appearance didn't give it the needed BO bump, and producers announced a June 24 closing.  When it closes, the production will have played 30 previews and 264 performances.  And there's a good cast recording of it so we won't forget it entirely. 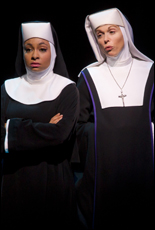 Sister Act
The God Connection: Bad girl on run from mob hides with nuns, turns their church around with some glitter and jazz hands, and finds that religion can be almost as fun as show biz.  Almost.
Church Is Out: Don't let the longish run fool you.  The show struggles most weeks at the BO.  Seems the one-two punch of movie-turned-musical-but-not-different-enough plus the absence of Whoopi Goldberg and Maggie Smith was enough to keep the throngs away.
In The End: Despite a better than average book overhaul by Douglas Carter Beane and a better than average score by Alan Menken and Glenn Slater, there just wasn't enough magic (or Raven-Symone) to keep the show going.  When the show closes on August 26 (if it makes it that long), it will have played 28 previews and 561 performances.


Anything Goes
The God Connection: Its main characters are a phony evangelist lounge singer and Public Enemy # whatever, posing as a priest.  The score includes "Blow, Gabriel, Blow."  OK, so it is marginally religious, but so is Leap of Faith.
Church Is Out: Though not my taste at all, this show has had an identical run to Sister Act, the difference being that it is Tony Award-winning: Best Actress, Best Choreography and Best Revival of a Musical.  And people are still coming, mostly.
In The End: 3 extensions and 3 Tonys does make a hit.  When it closes on August 5, it will have played 32 previews and 561 performances.


If only the actual show was this much fun!  Cool sailors, a shower scene and Stephanie J. Block and Joel Grey cutting loose... LOVE IT!!

WHAT IS LEFT: THE MEGA HIT 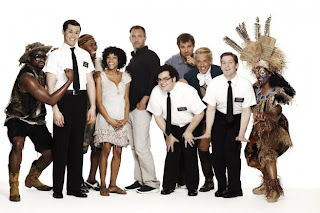 The Book of Mormon
The God Connection: The Church of Jesus Christ of Latter Day Saints is a religion.  Jesus has a cameo and so does Satan.  And those cuties in white short sleeves and black ties make me a believer.
Church Is Out: Its a love/hate take on the Mormons as a religion, and half the characters have a definite anti-God slogan-turned-production-number.  Religion is the subject matter, but that's not what it is really about.  Maybe that's the trick to religious mega hitting on Broadway.
In The End: 7 Tonys, SRO crowds, a $185 average ticket price, and so many lottery losers that the producers are giving free performances to make them feel better... the end of days is not anywhere nearby for this show.