(NOTE: The answers to last week's "Broadway Drinking Game" are at the very bottom of today's blog!) 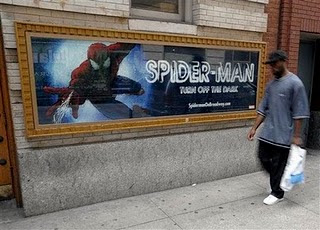 In reviewing all of my blogs over the past year - yes, a whole year has almost come and gone - I had to laugh when I saw that my SECOND blog ever discussed the troubles facing Spider-Man: Turn Off the Dark.  And as I always say, good or bad, I never hope or wish a show has bad luck.  Well, this show has had (and will likely continue to have) its share of public troubles.  But at least now we have some firm news:  previews 11.14.10, opening 12.21.10, at the Foxwoods Theatre, starring Reeve Carney, Patrick Page, and Jennifer Damiano.  Considering that full cast rehearsals begin TOMORROW, I am surprised we don't know the rest of the cast yet.

It is a year later, and nothing surprises me about this show anymore...

CHESS AT SIGNATURE: THE VIDEO

I will not be posting my review of the show until it officially opens in a couple of weeks, but thought I might post this video they put together to promote the show.  You will notice that the signature song (no pun intended) they are using is "Nobody's Side," a song that gets the same emphasis in production.  What I will say is that the video is slickly produced and does reveal the strongest aspect of the production, though not necessarily in the visual sense.  I would love to hear from you what you think of this video, and if you saw the show in Virginia, too, let me know what you thought.  I wonder which "side" of the consensus opinion I will be on...

DIDN'T SEE THIS ONE COMING...DID YOU?

Well, I wasn't too surprised to see the confirmation after weeks of speculation that Patti LaBelle would be replacing Lilias White in Fela!  But you could have knocked me over with a feather when I went on to read that the show was posting a closing notice of January 2, 2011!  I guess the producers would know much better than I how future sales look, but it is definitely not the show I'd have picked to fold next based on the weekly B.O. reports.  Of course, a national tour was announced, blah blah blah.  Some have immediately jumped on the "it didn't win the Tony, so it is closing" bandwagon.  I think their numbers don't indicate that as much as say for Come Fly Away.  I do, however, think it could at least in part be because it simply does not play well out of context and what did play on national television looked sloppy, sounded out of key, and made little sense.  That and its advertising campaign, which I love visually - colorful, eye-catching, and if looked at closely, right on target as to content.  But ads for shows are worth 4 to 5 seconds to anyone other than a theatre-goer who really looks each and every one over.  Maybe a quite a few paused when reading that Will Smith and Jay-Z are producers, but when they aren't in the show?  And still others interested in African history and in Fela himself might have paused longer.  But really, everything about that aspect of the show - advertising - is definitely aimed squarely at a very small segment of the theatre-going public.  Regardless, it is a shame that a different, culturally/historically relevant piece couldn't last longer.

Coming Sooner or Later to this Blog!
and...

Broadway by the numbers: