As Eliza Doolittle says in My Fair Lady (and probably Pygmalion), "Words!  Words!  Words!  I'm so sick of words!"  I have found myself thinking a lot about words and Broadway lately...

Words and music... how crystal clear the words are in shows you don't expect - American Idiot ... how crystal clear they have become out of the mouths of new babes - the replacement cast of next to normal ... and how unclear they are in shows where you'd expect clarity for the purpose for the understanding of the piece... several places in Billy Elliot (depending upon which Billy you get or which Mrs. Wilkinson, but never a worry if Greg Jbara is Billy's dad) 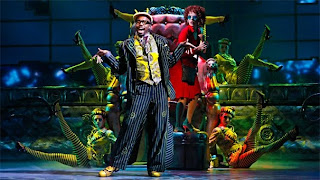 A Scene from Wonderland
Words that conjure up certain feelings... and I don't just mean "Christmas" or any other words that get the Darling children to fly in Peter Pan... I mean the title on the just-announced-for-Broadway Frank Wildhorn show Wonderland: A New Alice. A New Musical Adventure.  "Wonderland" alone makes me cringe as I find and and all versions of the Alice in Wonderland story to be disconcerting at best, annoying as hell at the least, and pretentious no matter what.    But perhaps my good buddy and frequent theatre companion  Mike put it best when he emailed me recently, "'Wonderland' sounds about as enticing as Douglas Hodge appearing in Naked Boys Singing. Unless it gets terrific reviews and has deep discounts (and, not or), I might not live up to my goal of seeing every new show."  Yes, we plan to see every new musical this season...  And the title... 2 "new"s?  Since when do you get to double-dip in the "new" pool.  (Side note/question: at what point does a show get to lose its "A New Musical" sub-title?  Is Wicked really a new musical anymore?) 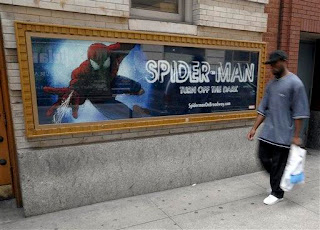 Spider-Man: Opening Soon at the Hilton Foxwoods Theatre
Speaking of words in titles: I've said it before; I'll say it again, especially now that it looks like it is a go...the authors/producers/powers that be need to really consider their Spider-Man: Turn Off the Dark title.  Sure it has loftier aspirations as a theme for the show, but isn't it just asking critics (who are surely sharpening their knives as we speak) to come up with review titles like "'Spider-Man' is Just a Plain Turn Off"... 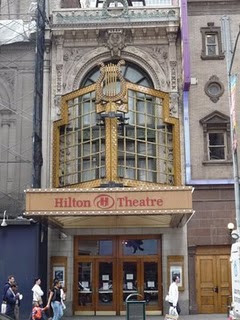 And finally... a major word change... the Hilton Theatre (home to Spider-Man: TOTD) will soon become the Foxwoods Theatre,  Foxwoods being the casino group that has operations in the middle of nowhere in New England and all over the place.  Fellow blogger and friend Esther has plenty to say about just that in her blog, which you can access by clicking here. Although I don't share her fear of Broadway musicals bypassing small cities in favor of casinos, I can understand her concern.  I'll bet that if Hairspray works out there, other "big" crowd-pleasing titles could run there eventually... I'm thinking Jersey Boys which already feels like a Vegas act to me...Mamma Mia! or maybe a transplant of the Vegas Phantom.  But I think shows like next to normal, West Side Story, Wicked and the like will continue to shy from Vegas and other casinos.  There was a harsh lesson to be learned from Avenue Q.

Have a few words for me?  Send them to jkstheatrescene@yahoo.com or leave a comment here.  Or follow me on Twitter and/or Formspring.
Jeff
Posted by JK at 3:32 PM