I have not seen or heard anything of Bloody Bloody Andrew Jackson beyond information gleaned from press releases, production photos and a snippet of one of the songs, “Populism Yea Yea.” And so I come to this evaluation of the show’s promotional artwork as a true “will I buy?” consumer.

Aside from a busy summer and persistent rumors that the show might move on to Broadway if it was deemed worthy, I wasn’t all that interested in the show, growing a tad weary of the Spring Awakening/American Idiot rock/angst trend. That and the show’s logo from its Public Theater run. OK, it was part of a whole season’s worth of shows, and all of them matched, but I have to admit an angry guy pointing at me with the title in plain black letters and with pink highlights wasn’t all that appealing. I’m guessing they were trying to show us that the Public Theater was riding the “edgy theatre wave.” That may be the case, but the effect of the logo on me was two-fold: a little bit of “this tells me nothing about the show” and a whole lot of “why should I plunk down my money on an angry kid pointing at me?” 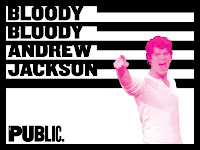 The Original Off-Broadway Logo
Since then, I’ve gotten to know more about the show, and the enthusiasm of its creators (Michael Friedman, music and lyrics, and Alex Timbers, book and direction) and its hot new star, Benjamin Walker. I had previously enjoyed very much Friedman’s Saved: The Musical, and Walker’s willingness to see the show through to Broadway, while giving up a leading role in the X-Men film franchise, really made me respect the guy. And from what little I’ve gotten to know about the show, I regret not going sooner.

I am very glad they got rid of the original artwork and came up with this:

The Broadway Promotional Art
This image really says a lot about the show and the perception they are trying to get out there.

First, the color choices are wise. Red, white and black continue the tradition of logos for shows going for a similar audience. Later ads for RENT, the Spring Awakening and American Idiot logos all feature this same color scheme, which instantly evokes anger, danger and edginess. Everything I know about the show says that they are presenting an America and American President known for being angry, dangerous and edgy.

The lettering, stark white, all-capitals against a black background and slightly askew is reminiscent of tabloid headlines. The all caps make it urgent, the off kilter “Bloody Bloody” and “Andrew Jackson” imply and demand a certain pause to take in what you are reading. What is “bloody bloody”? “Andrew Jackson” Who? Oh…the guy on the $20.00 bill… (Seriously, how many Americans, let alone modern generations of us, know a thing about the guy?) This way, we are taken in by the first two words and curious, but not automatically dismissive of the topic presented by the latter two words.

The scrap paper looking overlay of “Direct from a Smash Hit” is totally in keeping with underground, edgy newspapers and college announcements crudely made to announce indie rock bands often found taped to anything that won’t move on a college campus. And rightly so, the Public logo has a prominent but not overpowering presence. This seems to imply that yes, it was something off-Broadway and now it will be even bigger ON Broadway. 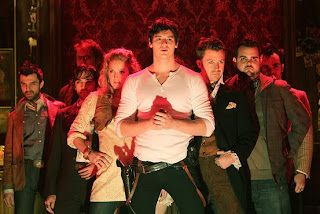 Benjamin Walker (center) and Company
But the real centerpiece of this promotional art is the photo that takes up the most space. This is the image that could make or break the show’s identity, in much the same way as the Cats eyes, waif-Cosette with Les Miserables, or the mask with The Phantom of the Opera. I think what they went with is perfect both as an iconic image and as a quick summary of the feel of the show. (I am really showing my age here, but my initial thought was the album cover of Bruce Springsteen’s Born in the U.S.A. - not a totally bad connection, either.)
You probably first notice the blue jeans, which may just be the single most common teen/young adult clothing for decades. Then there is the folded up American flag bandanna, stuffed in the back pocket, a nod to the American history aspect of the show, but the subversive point of view the show will take on it. A neatly folded kerchief would have implied something completely different. Instead, it is stuffed back there without much regard for the symbol that it is. (The coloring of the entire ad also makes the blue of the flag really pop out and gives the whole flag prominence instead of blending in.)

At first glance, the jacket looks a bit like lighter colored denim, but closer inspection of the sleeve reveals that it is fashioned like a late 18th century uniform coat, with decorative ribbon and ornate buttons. And that brings in the time period of the show, the anachronistic placement of today’s jeans with yesterday’s military garb tells us that we are seeing a show that is modern in presentation, historic in content. 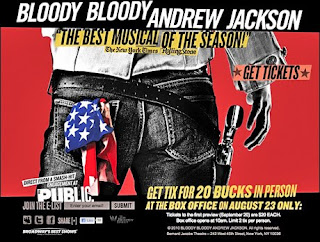 The Broadway Logo and ad promoting
first preview ticket sales
It is the final piece of the image that is most unsettling: a hand poised to draw the gun hanging by the hip in a holster made from a modern day belt that has purposely missed a couple of belt loops - the perfect mix of teen rebellion, historic war-making, and overall danger.

In short, this rock concert poster/teen rebellion/edgy tabloid look seems just the right combination to draw in American Idiot fans looking for their next fix, along with crowds of musical theatre fans who thrive on the heady mix of danger and smart, entertaining shows. Where I was once interested simply because any new show that gets that much buzz always makes me interested, now I am sure I want to see Bloody Bloody Andrew Jackson.

Comments? Leave on here, Yahoo me, Tweet me, or Formspring me!
Jeff
Posted by JK at 3:15 PM