Looking Back: The Capeman

With the advent of The Capeman as a staged concert presented by The Public Theater and directed by Diane Paulus this weekend, all eyes will be on this re-do of the much belabored, much discussed and considerably controversial musical which played Broadway in 1997-98.


The Capeman: The Story 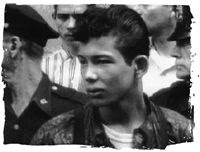 Salvador "The Capeman" Agron
at his arrest
The show, with music by Paul Simon and book and lyrics by Simon and Derek Walcott, chronicles the late 1950's real-life tragedy that surrounded both victims and villains when Salvador Agron, aka "The Capeman" because he wore a red and black cape on the streets of New York, fatally stabbed two white teenagers, Robert Young and Anthony Krezinski.  His accomplice, Luis Hernandez, was named "The Umbrella Man" because he used an umbrella during the attack.  It was later fleshed out that the Agron and Hernandez were part of a Puerto Rican street gang, The Vampires (hence the long black cape), and were sent to seek revenge on a rival white street gang.  Instead, they happened upon Young and Krezinski, who were not related to any gang but were in the wrong place at the wrong time.  Agron was sentenced to the electric chair, but was granted a reprieve to life in prison by Gov. Nelson Rockerfeller. Later, he was released, and died of natural causes in 1986. 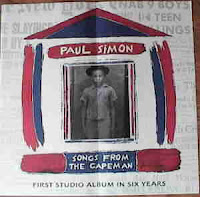 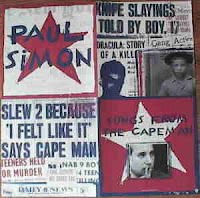 Promotional Art for the Concept Album and the Musical
The Capeman: The Controversy
While Simon, the cast and the creative staff worked on several versions of the show, controversy surrounded it from the outside.  The families of the victims held very public protests, even getting on national televisiob, against the show, claiming it glorified the murderer.  Despite arguments to the contrary - Simon himself publicly stated several times that the show was really about redemption and forgiveness of sin, and that the families (the mothers in particular) of the slain were not given short shrift, but instead played a very large and integral part in the show - protests continued right through opening night. 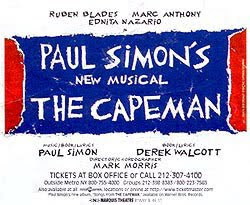 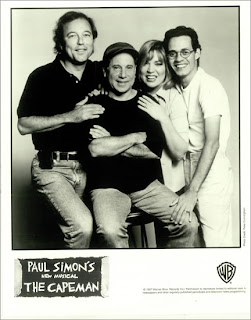 The Original Cast with Paul Simon (center):
Ruben Blades, Ednita Nazaria and Marc Anthony
Controversy swirled within the show as well.  Paul Simon made very public his condemnation of any and all trappings of opera and the modern stage musical - not a smart move for someone completely new to the Broadway game.  The show itself gestated for nearly a decade before finally being staged.  During the course of its pre-Broadway life and during its previews on Broadway, Eric Simonsom was replaced as director by Mark Morris, the choreographer and now director.  It was no secret that during previews Jerry Zaks and Joey McKneeley were brought in to doctor the show's direction and choreography.  Apparently, it was not enough, as the show, after 59 previews and 68 performances, closed on March 28 at the Marquis Theatre.  The Capeman lost $11 millon, and Simon has not yet returned to writing for the stage.

A complete cast recording was done by DreamWorks Records, but was never released, though eventually it was available at iTunes.  Simon himself recorded several of the songs and released a CD, "Songs from 'The Capeman'".  Some of the songs that stood out from the production included "Can I Forgive Him?", "Esmerelda's Dream" and "Satin Summer Nights."  The score combined salsa, hip-hop, doo-wop and gospel sounds to recreate the Latin flavor and musical styles of the late 1950's.

The Capeman: The Original Cast 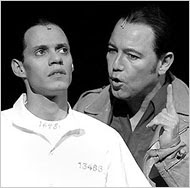 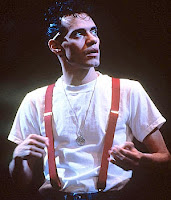 The Capeman: My Thoughts
I saw The Capeman during one of its final previews, and I rememberr distinctly thinking four things: Marc Anthony is going to be a HUGE star, the scenery (by Bob Crowley) was fascinating, unique and really cool, the show was a hot mess of confusion - the synopsis in the Playbill helped immensely, and most of all, that the audience was incredibly vocal and passionately moved by the piece.  Let me explain.  Marc Anthony was still a relatively new star to Latin music, and hadn't even really broken into standard pop music yet.  His voice was thrilling - organic and sweet - and he had enough charm, sex appeal and charisma to light the Coke sign in Times Square.  Bob Crowley's scenery offered a variety of points of view to get its point across.  The dream sequences were alive with color, and seemed at a distance, perspectively speaking.  The reality sequences were much more austere and offered off angles.  For example, I will never forget the public meeting room at Fishkill prison.  On the floor was a round table with sets that were bolted down and immoveable.  The drop was a series of those same tables - THREE DIMENSIONAL - with people sitting at them.  The perspective?  We, the audience, were the ceiling, looking down on the regimented, dull plain existence that was the prison.  The story, especially in act two, was all over the place - reality, dreams, reality, visual metaphor, more dreams, a series of sung letters (by Ms. Ramirez).  This is what can happen when there are too many chefs and not enough soup.  It seems Zaks only had time to really fix act one, after which I recall very clearly saying to my friend., "what is all the fuss?  This show is good and very together!"  (We still laugh about act two, occasionally!)  Flaws and all, it was a very interesting idea for a musical, just not put together by the right people.

But the audience, largely Hispanic and there to see for themselves just how ugly the show was in representing them, was very quiet at first, but as it went on you could hear people call things out, encouraging young Sal, booing his accomplice, weeping openly as all three mothers sang of destroyed lives and absolution.  Many a prayer was started and finished all around me.  In the end, they roared their approval, and wept and held each other as they walked out.  I have never had such an experience since.

The Capeman: The Future? 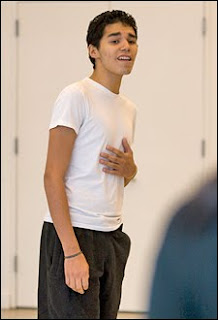 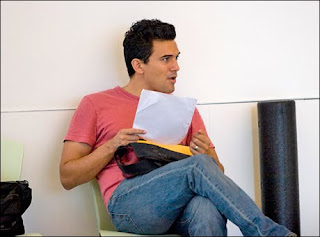 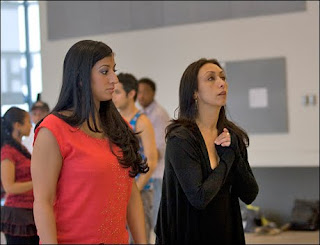 Original Cast Member Natascia Diaz (right)
The show plays three performances this weekend in Central Park, and features direction by Hair's Diane Paulus and choreography by Jersy Boys/Memphis/next to normal's Sergio Trujillo.  Among the cast of this staged concert are original cast members Natascia Diaz and Luba Mason (who married original star Ruben Blades) and Yank's Ivan Hernandez plays the older Agron.  There is a very interesting article/interview about the genesis of the original show and the perceived future of this revised version with Ms. Mason on Playbill Online - click here. 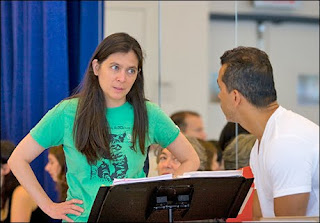 Comments?  Leave one here, email me at Yahoo, Tweet me or Formspring me!
Jeff
Posted by JK at 10:50 PM