Be sure to vote in the new poll, to your right!

WHAT YOU MIGHT HAVE MISSED!
Click on the following links to read blogs from this past week:

(Answers to last week's Broadway Game: Where on Broadway Am I? are at the very bottom of this blog!) 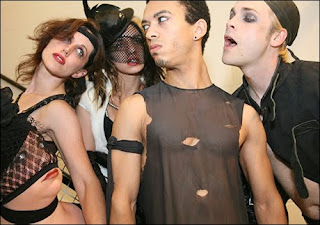 As you might have guessed, I am not much of a prude when it comes to the content of plays and musicals (or movie and TV for that matter).  But I am always interested in shows that try to stretch the boundaries of acceptability.  When it works in support of the authors' intent and/or the themes of the work, you will find no one cheering louder than me.  But when I doesn't work, I, like everyone else, scratch my head, then shake my head and ask, "why?"  Earlier this week, I came across an announcement for a "newrevisionist" production of Jesus Christ Superstar.  I was mostly interested in the fact that yet another American Idol contestant was attached to a show and being used as a selling point.  But further reading, and a look at the press photos, really gave me pause.  Modernizing?  No problem.  Associating modern themes to the Biblical?  No problem.  A non-white Jesus (Idol's Jose Candelaria is Hispanic)?  Again, no problem. 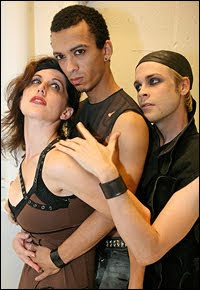 Maybe I am reacting incorrectly to this press announcement and accompanying photos, as I have not seen the production.  But one wonders what kind of reaction they are going for.  Isn't the show edgy and contorversial enough?  I certainly have no issue with gay themes, but am I to believe that Judas, according to these pictures, was at least bisexual, if not gay?  What about Jesus?  Mary?  Controversy for the sake of controversy bothers me.  Again, not having seen the show, let me say I am reacting to the pictures only.  Sex sells, and this certainly grabs the attention.  I noticed.  Now I hope the show makes a decent point. 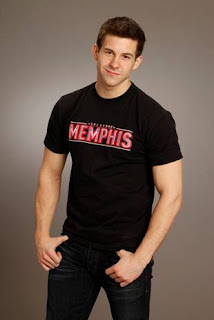 According to his latest Tweet, Memphis hunk, Charlie Williams, played his last show today in the Tony-wininng musical.  He is leaving to work on the pre-Broadway production of Leap of Faith, starring Raul Esparza and Brooke Shields.  But if you missed Charlie in Memphis, no worries.  He returns to the show in November.  And who knows? Maybe Faith will be a hit, and Charlie will have his next show all lined up! 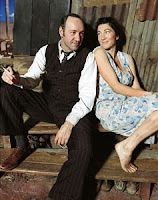 ANSWERS TO BROADWAY GAME: Where Am I On Broadway?
To play the game before you look at the answers, click here.

1.  The Times Square Coca-Cola sign
2.  Come Fly Away marquee
3.  American Idiot marquee
4.  Subway tile sign (this one happens to point the way to Madison Square Garden)
5.  The store sign over the entrance to the Broadway Gift Shop (45th Street entrance)
6.  The front of the Lunt-Fontanne Theatre, The Addams Family marquee
7.  The Imperial Theatre marquee on 45th Street, showing Billy Elliot
8.  Junior's on 45th Street
9.  The bottom of the Jacobs Theatre sign
10.  Promises, Promises marquee
11.  The famous Music Box Theatre sign
12.  The Memphis awning over the entrance to the Shubert on 44th Street