Trends of the Decade: The Down-Sizing of Broadway

Broadway (and theatre in general) has a long history of the “Pendulum Swing”: first, one extreme, then the other, with a few constants thrown into the mix. The first decade of the 21st Century was no different with regards to this one trend: everything seems to be getting smaller. 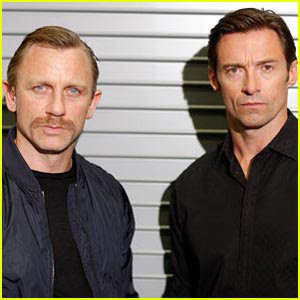 Daniel Craig and Hugh Jackman in
A Steady Rain
I suppose it was inevitable economically, as we toil through another bone-wearying national recession. Previously, there were just fewer shows during the lean times, but these days the number of shows remains a constant. It is the size of the show that has shrunken like a souvenir head on Bloody Mary’s cart. Fewer cast members and smaller sets which require fewer stage hands can drastically cut a producer’s budget. And when those fewer cast members are beloved film stars, producers can have their cake and eat it, too. It seems no matter how tight the theatre-goer purse is, there’s always room in it to shell out Premium prices to see Nathan and Matthew, Hugh and Daniel, or Denzel and Julia. And the extra bonus here is that 99% of the time, to get your star to play Broadway, you can make all of your money before the buzz dies down because you are forced into an urgent sounding “Limited Engagement! 16 weeks only!” run.

Artistically, this trend has its roots in the mid-90’s, when the pendulum was swinging rapidly away from the mega-musical 80’s, and people wanted to connect more with the people on the stage and not so much with the scenery. All it took was the mega-hit status of one Chicago to stimulate the less-is-more trend. That show, which continues to be a phenomenon, is the gold standard for down-sizing. Smaller company than the original, no scenery save for a glitter curtain and some black chairs, and a rotating cast of celebs who can come and go, come back again, and even tour the country. It is everything a producer dreams of: even at 70% capacity, the show is a money machine with low overhead, constant buzz and a name everyone in the country recognizes. Of course, there is a reason that this show continues to flourish and other imitators have failed, by and large: Chicago is timely and timeless; it has a fantastic book, even better songs and superb dancing and staging. Tourists looking for a big-Broadway show don’t even notice the lack of costumes (sexy!) or scenery. Razzle-dazzle, indeed.

So just how many ways has Broadway gotten smaller? Here are a few lists to ponder: 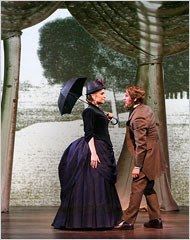 Sunday in the Park with George:
Art Isn't Easy - The scenery was projected! 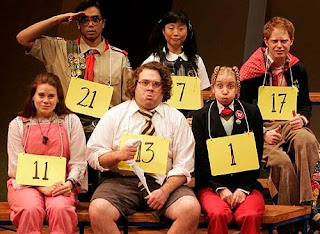 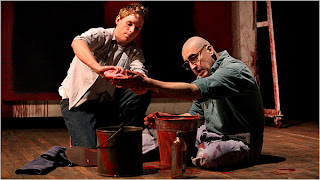 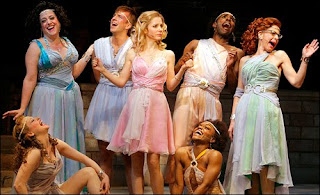 Xanadu: 9 muses played by 7 actors
(and 2 unsuspecting musicians in a 5-piece band)

The Actor-Musicians of Sweeney Todd 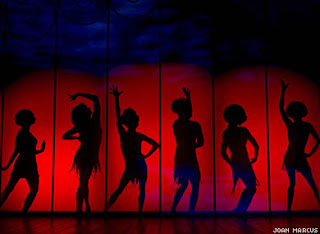 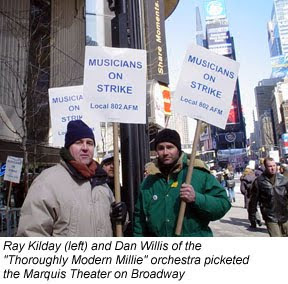 From the 2003 Broadway Strike

The bottom line is that there will always be an audience for truly quality shows no matter who is in them or how big it is. Quality is the key. And while the “big Broadway musical” will probably never fall out of favor - it is still what most of the world expects, especially at “these outrageous ticket prices.” But you know down-sizing has left its mark when the press materials for the upcoming Roundabout Theatre Company production of Anything Goes make a point to let everyone know that it will be a full-scale, large cast production. Take that, Chocolate Factory!

This is the final blog in my series about the Trends in Theatre: The First Decade of the 21st Century.  Click on the tab at the top of the page to see the full list of blogs and links to them.

Comments?  Leave on here, email me at Yahoo, Tweet me or Formspring me!
Jeff
Posted by JK at 3:31 PM