At this point, I feel like I might be rubbing your noses in it when I tell you that the Original London Cast Recording of Promises, Promises is a must-have for fans of the show, the score or its stars, Tony (Anthony) Roberts and Betty Buckley.  Why is it like rubbing your noses in it?  Well, Kritzerland Records only releases 1,000 limited edition copies of each CD that it remasters, and in visiting their site today for background information, I found out it was sold out!  Of course, it wasn't due to be released until the first week of September, so there must have been a lot of pre-orders (like mine).

For once, I didn't wait too long to get something I really wanted for my collection.  Promises, Promises with Betty Buckley has long been on my list, and I'm so glad I ordered it the day it was announced.  If you have it, too, please write and share your thoughts on it!  If you missed out, be sure to add Kritzerland's website to your "favorites".  They have an excellent catalogue with new titles coming out frequently.

Who knows?  Maybe they'll release more copies?  Go to http://www.kritzerland.com/ for more information on this and dozens of other collectible CDs they have.  And in case you find a copy someplace, here's my 10 cents worth on the recording: 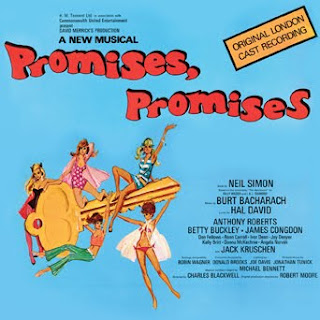 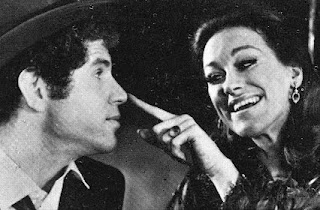 Anthony Roberts and Kelly Britt:
"A Fact Can Be a Beautiful Thing"
Noteworthy About This CD: 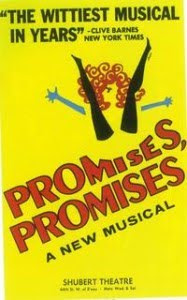 "The Falling Girl" Logo
(Here on the Broadway Windowcard)
The Artwork/Booklet: 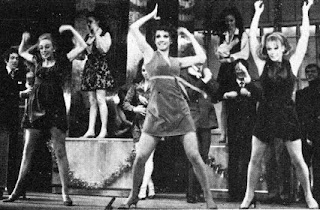 + Having the recording to begin with!

+ Betty and Tony at the start of their careers!

+ Jonthan Tunick's orchestrations are similar but mostly pretty different here than in either of the other versions, which he also orchestrated.  Like Buckley and Roberts, Promises, Promises is at the start of his long career.

+ Jack Kruschen plays Dr. Dreyfuss, the same role he played in the film The Apartment.  He was nominated for an Academy Award for that performance.

+ The arrangement (both orchestral and vocal) of "Christmas Day" are the best here than either of the versions.

+ The Italian "A Fact Can Be a Beautiful Thing" proves that quality works in any language!

- The lack of full use of the "orchestra voices" which add so much to the "Bacharach/David sound".

- James Congdon is the worst of the three recorded Sheldrakes.

- "Upstairs" is incomplete.  Only one verse?  Really?  It's not like it doesn't set up a major plot point or anything...

- "Where Can You Take a Girl?" sounds especially smarmy and ready for a sexual harassment video.  I know that's the point, but eewww...

Of the three, this is probably my third favorite, but considering I love them all and all for different reasons, it's still a winner in my book!

Comments?  Leave one here, email me at yahoo.com, Tweet me or Formspring me!
Jeff
Posted by JK at 12:01 PM