JUST OVER A WEEK UNTIL THIS MONTH'S POLL CLOSES!  PLEASE VOTE TODAY!

WHAT YOU MIGHT HAVE MISSED THIS WEEK!
Look for the answers to "He Sang, She Sang" in next week's column!

AND THEN THERE WERE NONE...

With this weekend's closing of Race, Broadway once again finds itself without a play on the boards.  Not to worry, non-musical fans!  There are 4 plays starting previews very shortly, including the return of Cherry Jones in Mrs. Warren's Profession.

Not wanting to leave us without his usual grace (NOT) David Mamet just couldn't say goodbye without running his opinionated mouth - decrying the lack of professionalism shown on the Tony Awards (lighten up), the incredibly rude behavior of audience behavior (I couldn't agree more), and general grousing about the lack of respect his latest got or didn't get.  If you ask me, a show that got to run for 297 performances, often at attendance percentages in the low 40s, got way more respect than several more worthy shows that ran a week or less.  Bitter at the lack of awards love?  Don't bite the hand that feeds you, Dave. 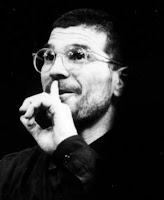 His next play, A Life in the Theatre, opens at the Schoenfeld Theatre on October 12, after previews that start September 17.  Starring Patrick Stewart and T.R. Knight, the play is scheduled to close just after the New Year.

I have not seen all of the "Live from Lincoln Center" presentation of South Pacific yet (I picked it up at the tail end of "Happy Talk," which opens Act Two).  I am so glad they still film these landmark presentations.  But is it too much to ask for decent sound?  While it is kinda cool to know it is live by the coughing, sneezing and "bravos" of the audience, it would be super nice not to hear crackling when people onstage yell or skips in the sound completely during musical interludes.  Better still, how about coughing up the bucks (LCT had to have made decent coin on this show) for an extra camera rehearsal?  You are going to tell me that a cameraman and his director missed a pivotal entrance by Billis and really had to have a camera already in use pan rapidly and refocus just to catch it? 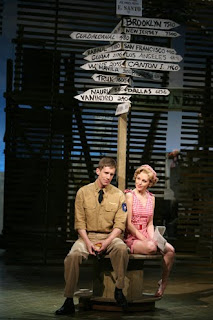 Andrew Samonsky with Laura Osnes
in South Pacific
Again, I haven't seen the whole thing, and I'm not sure if maybe my local affiliate of PBS didn't have anything to do with the sound quality or not, but I am sure of two things.  When I saw the show shortly after it opened, Bloody Mary (Loretta Ables Sayre) was 100% intelligible despite a thick accent and facial expressions obscured by on-the-verge-of-offensive Kabuki style makeup.  Not so much during act two of the broadcast.  And no offense to the actor, Andrew Samonsky, but the makeup they had Lt. Cable in sure was convincing in act two... pale as a ghost (he is sick and injured after all), I was sure the guy was close to puking...or using the broadcast as a chance to audition as a Lurch replacement in The Addams Family.  And that panting?  Yikes.  (Mr. Samonsky, if you really were sick, bravo for bucking up and doing the show.  If not and that was acting sick, didn't they tell you that what plays well onstage, i.e. making sure the back seats can see what you are doing, doesn't really work in televised extreme close up?)

All of that said, "bravo/brava" Paolo Szot and Kelli O'Hara!  Brilliant is brilliant no matter the medium.

COMING UP ON THIS BLOG


BROADWAY BY THE NUMBERS!


Comments?  Leave one here, email: Yahoo, Tweet me or Formspring me!
Jeff
Posted by JK at 9:57 PM