Over the past week, one show about language opened and another began previews in Broadway.  Of course, they are both about much more, really.  But at their roots, words and the use of them play heavily in the themes, humor and ideas of both.

The logos of both shows are similar in that both use the language angle centrally, and still both convey the differences of both productions.  Today, I'll take a look at David Henry Hwang's Ch'ing.lish. 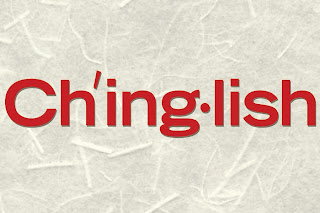 The first show, which opened this week at the Longacre Theatre.  The main logo is simply the title, which tells us a lot.  It is in bright red (Chinese flag red?  Red China?) which is in a simple typeface.  How it is written tells us we must pay attention to the word itself.  That is it is written in the style of how words are printed in a dictionary.  Nothing signals "look at this word carefully" like a dictionary word!  But more subtly, and just as important, the background is a light grey closeup of rice paper, which, in combination with the title, suggests a juxtaposition of different cultures.

﻿
﻿
That same logo appears on the marquee of the theatre.  Instead of the rice paper, the light grey now is words and terms common in modern English.  These terms are not directly translatable from English to Chinese.  And smaller logo displays further highlight this clash of cultures.  Below is just one example of the "Chinglish" which is so important to the play.  And all of the examples on these displays also point out a certain sense of humor, also so important to the play. 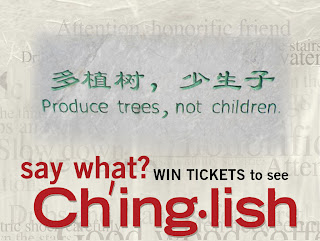 Just how successful the play is in commenting on the culture clash of words between Chinese and English remains for me to see (next weekend!).  The critics seem divided on that, but all of them agree that the play is funny.  And these days, funny can be a very good thing.  As someone who loves language and clever word play, this logo makes me look forward to the show.

I don't think I'd be as excited had they stuck with the Chicago logo... aside from the photos and knowing the playwright, little about the play is revealed, and it sure is an unattractive blend of colors - yellow-orange, red, pink and blue?  Wow...

Rate this blog below and leave your comments here, or by email at jkstheatrescene@yahoo.com, or Tweet me!
Jeff
3.061
Posted by JK at 12:01 PM