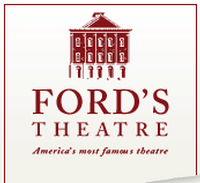 I suppose I should have started this series of blogs when I visited the Kennedy Center for the Performing Arts last spring.  That venue is certainly one of America's greatest venues for symphony, ballet, opera and, of course, theatre.  But the theatre I visited just this past weekend is truly steeped in history, both American and theatrical.

I'm speaking of Ford's Theatre, naturally.  One of Washington's most successful theatres in the 19th century, it was frequented by the society elite, regular folk, international dignitaries, and Presidents.  Even if you only know the story from Assassins, you know that at the height of the Civil War, President Abraham Lincoln and his wife, Mary Todd Lincoln occupied the stage left box, attending one of the final performances of the hit comedy (though NOT a critical darling), Our American Cousin.  One of the actors in the show, part of one of America's greatest acting families, John Wilkes Booth, was, on that night, April 14, 1865, destined to become famous for something far bigger than any show he would ever be in.

Having been there to see it in person was truly an experience.  The theatre, while modernized with central air, lighting and sound systems, has been left remarkably intact.  We sat in the balcony, a cozy space with great leg room, and a perfect view of the stage.  And of that Presidential Box, which is sealed off to the public and arranged as it was that historic night.  The downstairs with the same spacious seating affords all an excellent view.  Seems there ain't a bad seat in the house.  Exiting the house onto the street even has an historic feel to it, as you step through the large wooden doors and into the street.
﻿﻿
﻿﻿ ﻿
﻿

These day's the Ford's Theatre has expanded to the building next door, now a modern theatre lobby, museum entrance (it houses the actual Brooks Brothers suit Lincoln wore that night), a concession stand and gift shop.  History fans are also treated to a full Lincoln museum in the basement.

﻿﻿
There, you can see Lincoln's personal safety kit - his own dagger and brass knuckles - to fight off would be assassins.  There are artifacts from the Lincoln White House, political memorabilia, and a small section on Booth and his pistol.  Throughout the museum there are life sized statues of Lincoln's political opponents, would be assassins, and the important people in his life.  They are extremely realistic, and their arrangement and proximity to museum-goers lends an interesting (and a bit creepy) feeling of being "in with these people." ﻿
﻿ I would recommend visiting the theatre for a tour (it's free) and for a show.  The upcoming season includes their internationally-acclaimed annual production of A Christmas Carol, and this spring, a production of 1776.

For much more information, go to http://www.fords.org/.

Rate this blog below and leave your comments here, by email at jkstheatrescene@yahoo.com or Tweet me!
Jeff
3.051
Posted by JK at 12:01 PM