A word of caution if you Google "man and boy": be sure to add either "Broadway" or "Roundabout" after it BEFORE you hit enter.  Otherwise you might find yourself in the midst of some rather, um, unsavory websites.

But looking at the logo for Terrance Rattigan's play, Man and Boy, which opens tomorrow at the American Airlines Theatre, there is no such confusion.  And even a cursory glance at the image tells you a lot about the play, even if you know nothing about it, like I didn't. 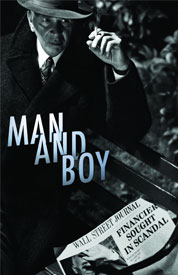 First, the grey sepia tone of the photo suggests a time past, and the smoking (on a public park bench, no less), the fedora and suit on the central figure suggests a specific time - the late 20's/early 30's, like The Untouchables or something.  Then there is the newspaper, being handed - or maybe an accusatory shove - to the figure.  If it were a modern play, The Wall Street Journal, might be seen on an iPad!

Of course, the details of the photo tell us specifics of the plot.  The figure is either the person involved in the news article, or is connected somehow to that person - his boss?  an investigator?  Hmm, the bit of news photo that you can see confirms that the man in the fedora is the man that made headlines. And the headline really tells the rest: "Financier Sought in Scandal." 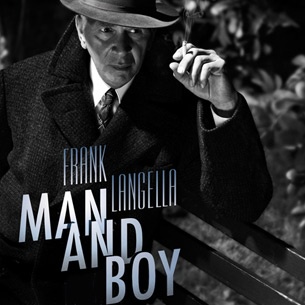 Finally, that figure is easily recognizable.  He is, after all, a multi-Tony winner and an award winning film actor.  But just in case, you can't put a name to the face, some of the ads tell you that he is none other than Frank Langella.  With the title in a font that fairly reeks "film noir" you know that there is something serious, mysterious and dangerous, going on here.  But I have to admit, the meaning of the title itself remains an enigma to me.

But given the amount of information the excellent photo gives, as well as its style, maybe keeping the title a mystery is actually a selling point.  One thing is for sure, though.  The image and Frank Langella's presence in it pretty much rules out that Man and Boy has anything to do with those nasty sites you can find by Googling!


Rate this blog below and leave your comments here, or by email at jkstheatrescene@yahoo.com, or Tweet me!
Jeff
3.040
Posted by JK at 3:00 PM