I guess it isn't too surprising to hear from Newsies star Jeremy Jordan that the Disney film upon which the show is based is part of what made him want to be a musical theatre actor.  Or that Lysistrata Jones star Josh Segarra decided the stage was for him after seeing a performance of Take Me Out.  It is moments like that - life changing moments - that most actors can site without even thinking about.  For Jordan, it was seeing guys sing and dance; for Segarra it was about the connection to sports and making that connection onstage.  Either way, we are all better off because these two amazingly talented rising stars have made acting their career. 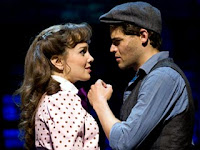 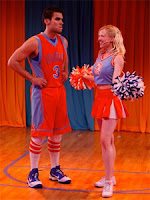 Boy Gets the Girl: Jeremy Jordan in Newsies
and Josh Segarra in Lysistrata Jones
The review for Disney's Newsies in the New York Times, talks about the future of the property, with Broadway looking more likely than ever, but questions its potential has a mega-hit "Disney" musical.  "The bigger question is Broadway, where the absence of magical elements (talking animals, flying nannies) or a brand-name title may be a handicap, particularly in such a boycentric show."  OK, maybe a lack of flashy spectacle may discourage parents from bringing the littlest theatregoers.  But what about the grossly under served middle and high school boy?  It stands to reason that "boycentric" shows will be of interest to boys.  Boys seeing characters that they can relate to will make a show interesting and even "cool."

There are shows on Broadway right now that should be speaking to these young men, each with a unique role model and hero for boys to look up to. 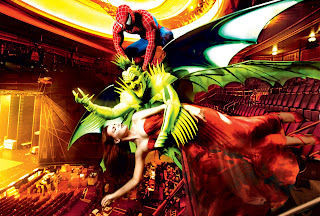 Spider-Man: Turn Off the Dark:  The spectacle, the danger, the awesome aerials, a very cool villain, and even the pretty girl should draw every young comic book fan to the Foxwoods Theatre.  But ultimately, what should stick is the best "boy" character on Broadway, Peter Parker.  There isn't a guy in the world who hasn't felt like a goober - awkward, geeky, zero romantic skills, unheard.  And he's an underdog who rises above all of the bullying. 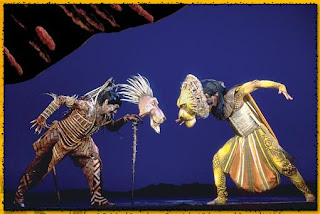 Disney's The Lion King:  Is there a better way to teach an important lesson about what it means to take responsibility for one's actions, and for the larger picture of being made to answer to the generations before and to provide for generations in the future?  And that it is a young man/cub who takes this journey should make it interesting and poignant to boys of all ages. 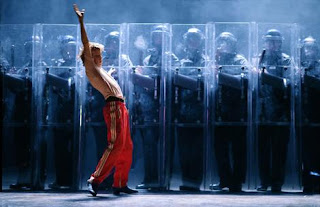 Billy Elliot: The most literal lesson on the importance of the arts in a boy's life could also be the coolest and without special effects to boot.  Add the fun of the boy outdoing all those girls certainly has its appeal to a young guy's ego.  It also makes "expressing yourself" no matter how you choose to do so very appealing as well. 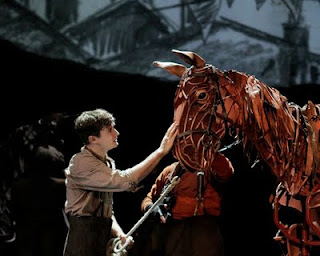 War Horse: Life-sized horses, thrilling war scenes, and a young man who sets his fear aside for his best friend sounds like the perfect "boy story" to me.  And what a great chance to show a kid that live theatre can be as action-packed and exciting as a movie!  The ride home could also provide parents a great chance to talk about important "boy" issues - familial responsibility, loyalty, the perils and downside to war, and, yes, the strength of women through it all.

High school guys have Lysistrata Jones to look forward to - college basketball, sexy cheerleaders AND music that you would NOT be embarrassed to have on your iPod!  And if Newsies makes it to Broadway, there's a show for any guy in the family! 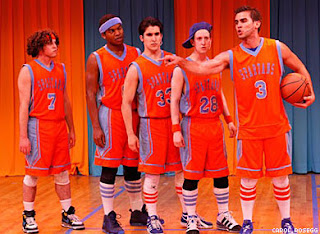 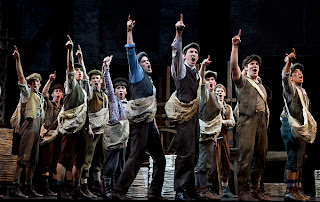 Why is that important?  Now is the time for the theatre gods to find the next Jeremy Jordan, Seth Numrich, Reeve Carney and Josh Segarra.  Do you know a young man whose life might be ready to change?  Take him to a Broadway show!


Rate this blog below and leave your comments here, or by email at jkstheatrescene@yahoo.com, or Tweet me!
Jeff
3.035
Posted by JK at 9:54 PM