Hockadoo! Memphis Turns 2! (Plus a Tour and a New Huey, Too!)

You never really hear much about one of my favorite shows currently on Broadway, Memphis.  Talk about "the little show that could"!  It toiled in development for years.  It is an ORIGINAL musical, only loosely based on actual events and people, not a book, not a play, and NOT A MOVIE!  It has a score by a rock star, but who had never written for theatre.  And it opened with two relatively unknown stars.  And now it has 4 Outer Critics Circle Awards, 4 Drama Desk Awards and 4 Tony Awards - all including Best Musical of the 2009-2010 season.

But this week has been a big one for Memphis:

﻿
﻿October 14: The First National Tour of Memphis begins performances in its namesake city, Memphis, Tennessee.  The cast is led by Bryan Fenkart as Huey and Felicia Boswell as Felicia.

October 16: The First National Tour officially opens.   The tour, just like its Broadway parent, is directed by Christopher Ashley and choreographed by Sergio Trujillo.    Here is some opening night footage from YouTube.


October 19:  Memphis celebrates its second anniversary and 832 performances on Broadway, with much of the original cast, including Chad Kimball and Montego Glover.

﻿﻿October 20: Fans of Memphis are invited to a special preview performance by Tony nominee Adam Pascal (RENT, AIDA), who will be Broadway's new Huey, beginning October 25. 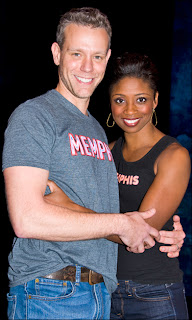 October 23: Chad Kimball, the Tony nominated, original Huey, will play his final performance in the show at the Shubert Theatre.  Montego Glover will remain with the production.

For a lot more information and cool stuff about the 2010 Tony-winning Best Musical on Broadway and on Tour, go to http://www.memphisthemusical.com/.

Rate this blog below and leave your comments there, or by email at jkstheatrescene@yahoo.com, or Tweet me!
Jeff
3.053
Posted by JK at 10:21 PM