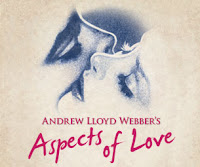 For the second time in as many months, I have managed to see shows that I did not really like, and ended up finding a new respect for both.  OK, so how I now feel about Aspects of Love isn't quite the euphoric transformation I felt after seeing the mesmerizing Follies, but I found out that it can be/is actually a fun, interesting two and half hour escape.  Unfortunately, I saw the final performance of the production at Philadelphia's historic Walnut Street Theatre - and I really mean HISTORIC!  This was the first production of its 203rd season.  Yes.  203rd season.  Since 1809, they have been producing seasons of shows.  But more about that in another blog...

I actually came to this production because my buddy Mike loves the score (not the lyrics as much).  He kept insisting that I really must have missed something when I saw it on Broadway in 1990.  I'll be completely honest.  I remembered 5 things about the original Broadway production.  I remember thinking, "there are about six characters and I'm not sure I could tell you who was who when it was all over."  I remember that the back wall looked like bricks until it inexplicably broke apart to look like a far off mountain range.  I remember a ton of scenery that got in the way more than it added to the show.  I remember giggling at the repetitive lyrics and completely motionless Marcus Lovett singing "Love Changes Everything."  And I remember being terribly bored until "Hand Me the Wine and the Dice," which is bad since it is in the 15th scene of the second act.

﻿﻿
﻿﻿
What a difference 21 years and considerably less leaden direction makes.  Director Bruce Lumpkin, whose credits include a resident directorship at Theatre Under the Stars, and working on several productions with the great Tommy Tune, has had his design team strip away any memory of its New York predecessor.  Gone are the heavy bricks, chunky scenery pieces and overly moody lighting.  In its place, beautifully realized panoramic projections, scenery pieces that suggest rather than tell us where we are, and an airy, yet sexy and mysterious series of gauzy sheer curtains hide, titillate and flow around the characters as they explore all (and I mean all) of the titular aspects of love. (Scenic design by John Farrell; costume design by Colleen Grady; lighting design by Jack Jacobs.)

There was a refreshing and enlightening effortlessness about the entire production.  At its very core, this show is a romantic melodrama.  Hmm.  No.  At its core the show is an extreme melodrama, with a confident sexuality all wrapped up in a pretense of romance.  And Mr. Lumpkin has assembled a cast of actors that understand the complexity of it and also the simple silliness.  Let's face it.  If it is taken too seriously, you get eye-rolling boredom or uncomfortably slutty sexuality.  Instead, with a sense of humor and an understanding of the very operatic style of extreme emotions changing within a matter of minutes, the show is a lot of fun.  It asks a lot of the audience to believe it, but is made all the easier when the cast believes it.  And this cast of Broadway and regional veterans believes and delivers on all levels.

﻿
﻿
Arin Edelstein makes the most of her limited act two stage time as Young Jenny.  In that short time, the actress manages to convey a young girl's love for her father, a respect for her oft-absent mother, and a maturity born of a childhood spent amongst constantly trysting adults.  Mid-scene (through some smooth, charming choreography by Michelle Gaudette) young Jenny morphs into more grown up Jenny.  And just as smoothly, Jenna Brooke Scannelli picks up right where her predecessor left off, this time growing into the kind of woman she has learned to be from her mother - exuding a smooth sexuality and an intense need to feel love and be loved.  Both young actresses are to be commended for such maturity and realism.  Meanwhile, saddled with the character the might represent both the love of friendship and that of unrequited love, but not fully realized in either way, Broadway veteran Laurent Giroux still manages to make a comfortable impression as Rose's manager and lifelong confidante.

Although the plot takes us shakily into a love pentagon (if you add Jenny to the mix), there is, primarily, a central love quadrangle.  Alternately interesting, always sexy, and sometimes even laughable (thank God Don Black and Charles Hart have both improved their lyrics in subsequent shows) the four lead actors not only make it believable, but interesting and admirably honest.  As the earthy lover of both George and Rose (and eventually Alex), Danielle G. Herbert brings a bold sexuality and coy tease to the artist Giulietta.  Just as she seduces each of her lovers, so, too, does she seduce the audience, who was so clearly smitten with her that they probably never gave thought to all of the sex she was having with virtually everyone.  Her impassioned "Hand Me the Wine and the Dice" did not disappoint.  Broadway's Paul Schoeffler really delivered as knockoff artist George, a man with the ironically weak heart, who loves and accepts everyone - his nephew, his wife, his daughter, his lover.  Representing both the passionate lover of art and the passionate love of a father and husband, Mr. Schoeffler sings beautifully and is a tower of strength and a sweet puddle of lovesick mush, too. 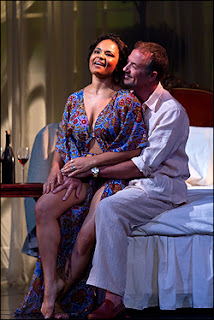 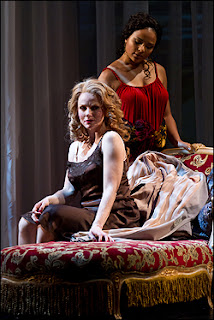 ...and Giulietta loves George and Rose!
(Danielle G. Herbert, Pauls Schoeffler and Jennifer Hope Wills)
Charles Hagerty does some very nice work with the somewhat complex character of Alex who ages some 17 years over the course of the play.  From lovesick and horny 17 year old who feels EVERYTHING to the adult Alex, who reaches out to everything to feel ANYTHING, Hagerty has the biggest journey to take.  He is a charming, good looking young man with a great voice.  He holds his own against the other three very strong types.  He is mostly successful, less so in the opening scenes, but fully engaging right to the very end.  I suppose that for any production of Aspects of Love to work, one must have a strong Rose, one capable of believable emotionally extreme mood swings, believable sexual fluidity, and also a strong inner core of loyalty over passion.  This production certainly had that in Jennifer Hope Wills, one of today's most appealing actresses, who can play a wide range from broad comedy to overwrought melodrama to sincere gravitas.  If she doesn't believe in the material, we can't believe in Rose's wild actions and ever-changing sexual tastes.  Ms, Wills' voice is stunning for its range - from operatic to Broadway belt to tender balladeer - and her charisma fairly fills up the enormous Walnut Street Theatre.

I should note that this production wisely uses the arrangement of "Love Changes Everything" that Andrew Lloyd Webber created for the Tony Awards to frame the show.  It is a wise move and sets up instantly the relationship between all of the principals, and makes the repetitive and often banal lyrics much less obvious and infinitely more interesting.

Funny, that's just how I found this production to be: less obvious and infinitely more interesting than ever before.

Rate this blog below and leave your comments there, or by email at jkstheatrescene@yahoo.com, or Tweet me!
Jeff
3.056
Posted by JK at 11:00 PM