And the Sondheim Award Goes to... 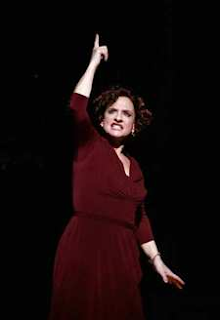 A few days ago, the Tony Award-winning regional theatre, The Signature Theatre in Arlington, Virginia announced that the 2012 recipient of its Stephen Sondheim Award would be Patti LuPone.  The third winner of this prestigious honor, Ms. LuPone follows in the footsteps of Angela Lansbury (2010) and Bernadette Peters (2011).

A pretty clear choice, Ms. LuPone has played many of the principal female roles in the Sondheim canon, including Fosca from Passion, Joanne from Company, Mrs. Lovett from Sweeney Todd, and her Tony-winning turn as Rose in Gypsy.

Fast forward to Sunday afternoon and I am in Mike's car and we are returning from Philadelphia after seeing Aspects of Love.  The conversation topic: who else will likely receive the Sondheim Award?  At the time, we speculated that the award may or may not go only to actors who have made several appearances in Sondheim shows.  Since then, I found out, according to the blog D.C. Theatre Scene (no relation to this blog), "Signature Theatre gives the Sondheim Award annually to an individual for his or her career contributions to interpreting, supporting, and collaborating on Sondheim’s works."  So, Mike, it seems we were right to go beyond just actors in our speculation.

﻿ ﻿ Here are some of the names we came up with as potential future recipients (and a few of their Sondheim credits):

﻿ ﻿
When we got to Mr. Prince, it brought us back to Ms. LuPone, as he directed her in her Broadway triumph, Evita.  And that got us to thinking...

What if there was an Andrew Lloyd Webber Award; who would receive that honor?  And we came up with quite a list!

Did Patti make that list, too?  Find out soon... in my next blog!

Who else might you give a Stephen Sondheim Award to?  Write in and let us know your thoughts!


Rate this blog below and leave your comments here, or by email at jkstheatrescene@yahoo.com , or Tweet me!
Jeff
3.059
Posted by JK at 12:02 PM