"Harsh" is the word Arthur Laurents used to describe the first winner of the Laurents/Hatcher Award for Best New Play, The Submission by Jeff Talbott.  A lot of ink and cyberspace has already been given to summarize this tale of a young playwright who has written an excellent play about the African-American experience, which is now on the verge of becoming a national phenomenon.  Trouble is he's white and feels that no one will get behind it.  So he hires an actress to "play" the playwright - and now his play is being hailed as the best play of its kind since Lorraine Hansberry's A Raisin in the Sun.  Exactly how "harsh" it is, though, depends on how you feel about a work that plays the race card, the gay card,  pushes all the right buttons,and makes you consciously aware of the playwright's manipulations.  The word I might have used is "surprising," as in I can't believe that a play so obvious in its intent and machinations can still be so consistently entertaining and thought-provoking.

Less than five minutes into his play, Mr. Talbott tries his hand at irony: "It's so... producible!" the playwright's best friend tells him. "Like, [insert extremely overused expletive], right?" "Four actors and a unit set!"  Instead of an ironic moment, we were treated to the first of several moments where, as my friend Mike said, you become extremely aware of the writer and less aware of the actors and the play.  Similarly, you could feel the inexperience of the writer who relies heavily on swearing.  The characters swear when trying to appear relaxed, when they are tense, when they are hurt, angry, sad...even when they are happy.  I'll admit that I have uttered expletives in each of those instances.  Now I don 't live the "cool Manhattan young professional  lifestyle" so I could be totally wrong here, but I don't know anyone who swears as much the main character does in this play.  And the problem with it is that it has a numbing effect, then it becomes so regular that even as emotions heighten, the words have zero effect in amplifying any feelings being conveyed.  Worse yet, as the play evolves into a passionate, cathartic (and LENGHTY) argument, characters who had thus far resisted joining in the "fuck" fest, slip into it and match the main character f-bomb for f-bomb.

All of this building tension and endless swearing is also almost excruciatingly manipulative when it becomes obvious that all of the shouting is replacing "that word" (yes, the characters actually refer to it as "that word").  Actually, it ends up being "those words," but, as the argument ebbs and flows (I mean this a a compliment, truly) and reaches its obvious apex (not a compliment), with the shouting of "that word," the sharp inhale that the audience inevitably does feels fake.  I mean, come on, we'd been dancing around that racial slur for the better part of a half an hour, and the audience is still shocked?  Please.  And really, is it that shocking when a white guy pretends to be a black woman who writes what is apparently the best examination of the African-American experience ever to be staged, it stands to reason that racism will rear its ugly head

And then, as if at first to balance and then to spread the social injustice around, Talbott attempts to equate racism with homophobia.  Certainly, there are parallels.  And he doesn't hold back with the gay slurs and stereotypes.  Interestingly, instead of making a truly persuasive point that life can suck or be a triumph when you aren't white and straight, the gay stuff falls flat.  You'd think that the audience would gasping its lungs into collapse when a character says things like, "How does it feel to be the one always facing the headboard, ass in the air and your face is in the pillow?"  She refers to his sexuality with every epithet you can think of, except maybe "fudge packer."  And when her screaming match ends with her spitting the word "faggot" in his face, the audience sat silently.  Maybe we knew that inevitable discussion of "it's OK for gays to call each other 'faggot' and for blacks to call each other 'that word.' was coming next.  (You'll note that I am using the word "faggot," despite how degrading I find that word personally, but have not - and will not - use "that word.") I hope that the audience, in their heart of hearts, was just as appalled at BOTH terms. 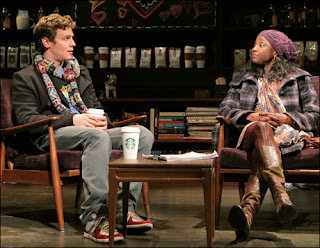 But the truth is, I think the real difference is not that one term has more impact than the other, but that as presented in this play, the gay character is, to be blunt, an asshole.  He never shuts up and spends most of his lip flapping backtracking over something else offensive he has just said.  He never stops talking, forever interrupting or simply talking over others.  He has his say, and then never lets anyone have theirs.  And while I can never really condone any form of gay bashing, this guy comes pretty damned close to deserving it.  This is a guy who actually believes that when an African-American wins a Tony, for example, it is a "Blony", awarded only to placate "second-class talent."  (And he goes on about Bloscars, Blemmys, etc.).  He is actually IN THE ARTS, says these things aloud, and wonders why is career has thus far resulted in a few readings.

Both characters make some excellent points about racism and homophobia.  And more than a few of their ideas give one pause because they are true, no matter how nasty and unfortunate they are.  But any headway made in those moments is obliterated in the shouting and overt avoidance of the "elephant in the room."  This could have been a play that reveals great ideas and new ways of looking at a continual problem in society.  Imagine how this could have been had some new ground been covered?  What would happen if it was revealed that all of those August Wilson plays were really written by Harvey Fierstein?  Sadly, this play can only lead me to wondering what could have been.  And yet...

And yet, I think Mike and I talked passionately about the themes and ideas presented in the play for almost two solid hours.  So there must have been something about the play.  And now, a few days later, the distance from the event has made me really think about what that is.  Easy.  The five people who made the play come to life.

Walter Bobbie has little piece of broken glass into a shiny gem, even if it isn't quite a diamond.  Considering how much of this play comes in short bursts in a variety of settings (creatively rendered by designer David Zinn), and one very long argument scene, it is remarkable that the play runs so smoothly and that the tension actually builds, the more obvious it comes.  All of that comes from the very skilled directorial hand of Mr. Bobbie, whose only misstep with this production is that he couldn't get us to gasp twice.  (More the fault of the playwright, really.)  And it certainly helps that he is working with a top notch cast.

Film star Eddie Kaye Thomas is sharp, funny and a calm anchor in storm of extreme personalities in the role of Pete, the understanding boyfriend of the main character.  That he makes any impression at all is to be credited entirely to this very good actor, as what he has to work with is a woefully underwritten part.  Like the play, it is a part with great potential, but instead of being used to help make the point, the playwright has not let his characters do much of the work.  A better written, if still not totally complete, role is that of Trevor, played with some delicious underplaying by Will Rogers.  He is so low key, so "New Yorker," that one almost forgets the truly thankless position his character is in.  Trevor is best friend to the playwright and lover to the hired actress!  This marks yet another potentially interesting plot point that goes only partially examined.  Personally, I can't wait to see both of these actors in a truly excellent piece of theatre.

Spring Awakening star Jonathan Groff continues to surprise and delight with the depth of his range and talent.  As I rather unceremoniously stated earlier, his character, Danny, is an asshole.  The more he talks, the more he gets under your skin.  And yet, Mr. Groff makes him also marginally likable - enough that we don't turn him off in our minds or dismiss him completely.  The word "fuck" rolls off of his tongue like he is reciting poetry, and it is to his credit that he finds some many various ways to say it.  And he makes his barrage of racial slurs scarily believable.  And when he finally primal screams "that word" it is with such venom that it is truly shocking for its deep rooted hatred.  Mr. Groff hurls himself into the role with abandon, literally spitting and crying his way through the show with an authenticity that pleases this avid theatre goer. 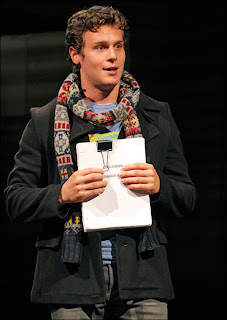 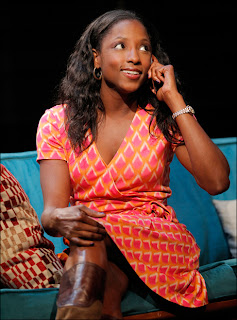 Left: Jonathan Groff and Right: Rutina Wesley
But the performance of the evening is by Rutina Wesley, an actress whose work I know nothing of, but will change that shortly.  If she is even half as riveting in True Blood as she is on this stage, she must really be something.  A difficult role, one can't help but notice the obvious pain she is feeling (both as character and actress, I'm betting) as more and more crap gets hurled at her.  Mostly, her character, Emilie, is able to deflect, justify and even understand some of the prejudices she is subjected to.  But a person can only take so much, and soon she joins in the mayhem, going toe to toe, spit for spit, tear for tear with Danny.  She is fierce and heartfelt throughout.  Ultimately, though, the character is overshadowed by the playwright's need to inject himself into the proceedings, using her character as his mouthpiece, mostly just let things build to that one unnecessary crescendo.

A better writer could have given that moment of obviousness and built to something far more profound.  Like leaving things unsettled, but with the characters actually changing.  As it is, everyone is now scarred, but largely unchanged, aside from not talking to each other (and affording us some blissful quietness).  I guess the real, if unintentional, irony here is that a play about a play that will change the world tries to do just that, but just doesn't.  Despite its being very entertaining, very well acted and causing much passionate discussion, one has to ask: How good is a play that brings up a lot of issues, but never really does anything with them?


Rate this blog below and leave your comments here, or by email at jkstheatrescene@yahoo.com or Tweet me!
Jeff
3.042
Posted by JK at 10:42 PM