Broadway on TV: Dancing With The Stars

Well, I'm not full of myself enough to think that anyone from TV reads my little slice of the blogosphere, but I am glad that something I hoped for came true this week on Dancing with the Stars, with their tribute to Broadway.

When I wrote my last rant, more than a few of you were quick to remind me that this very show has hosted performances from several musicals, including West Side Story, The Lion King and Mary Poppins.  Very true.  And several of you mentioned that relatively frequently the dances are done to show tunes and/or show tunes by way of jukebox musicals.  Again, very true.  And many of you reminded me that they try very hard to have "stars" without formal dance training.  Good point.  I'm guessing that would leave out a very large number of Broadway folks right off the bat.  OK, you win.

So, let's celebrate (with a couple small quibbles) what we've been given!

First!  How awesome that there was a great representation of what Broadway is - a mixture of classics, contemporary modern, and jukebox/tribute musicals.  We got everything from Guys and Dolls to Grease to The Phantom of the Opera to please those who love the classics.  We got Jersey Boys to appeal to the guys watching with their dolls at home, not to mention some cheeky Spamalot.  And we even got some RENT and Chicago. Second!  There was also a nice compliment of Broadway "extras."  The opening came courtesy of the OBC of Sister Act, andthe rousing "Raise Your Voice." My girl and friend of this blog Kristin Chenoweth, with a really terrific mini-medley of "Maybe This Time" and "I Could Have Danced All Night" (Cabaret and My Fair Lady, respectively).  Aside from her typically terrific vocals, she also danced with the pros, something you don't see very often from the guests on the show.  Then there was the first group dance to another mini-medley of "Hey, Big Spender" and "The Money Song" from Sweet Charity and Cabaret, respectively. 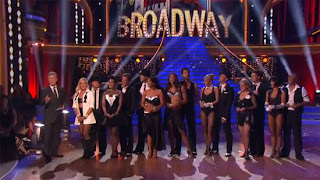 Third!  The little things count in big ways.  How nice after 13 seasons to recognize musical director Harold Wheeler's 6 Tony nominations (including for orchestrating Hairspray, The Life, The Full Monty and Dirty Rotten Scoundrels)!  How about pretend awarding the two best dances with Tony Awards!?  Or Carrie Ann Inaba's tribute to Bob Fosse?

And the fun continued on the results show last night, too!  Kristin got to promote her new album and her upcoming ABC series.  And she still managed to promote the Great White Way!  Then there was the very well-danced (if vocally challenged) performance of "42nd Street," "Cool" and "In the Heights" (from, respectively, 42nd Street, West Side Story and In the Heights) starring Corbin Bleu and a great troupe of dancers, choreographed by Kenny Ortega.

That's 15 numbers from 14 musicals represent the very best of decades of the American musical. 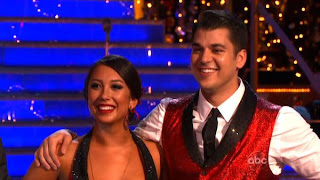 Imagine that all of that and not a single jazz hand, despite several references to just that in the pre-dance packages.  And of course the gay stereotyping -  asking Carson Kressley to come back and "supervise" because it was such a shame that he got cut one week shy of Broadway week.  Would that "courtesy" have been extended to soccer player Hope Solo or conservative hard ass Nancy Grace? I doubt it.  But why Carson?  He has zero connection to Broadway.  He's gay and we all love musicals don't we?  Or how about when the hosts asked if dancing to Broadway show tunes made Rob Kardashian feel like more like the man his mother thinks he's becoming.  An uneasy giggle and then reference to the song he did dance to.  The only song not really written for a show, "Walk Like a Man" from Jersey Boys.

Like I've said before... Steps forward, steps backward.  I know.  At least there were steps.  Believe me, I'm grateful.

(Images from ABC Television.  The copyright is held by the network and producers of Dancing With the Stars.  No copyright infringement intended.)

Rate this blog below and leave your comments here, or by email at jkstheatrescene@yahoo.com, or Tweet me!
Jeff
3.058
Posted by JK at 12:01 PM

Labels: Broadway on TV, Dancing with the Stars