The producers of Bye Bye Birdie must have been relieved to see something about their show in print that was negative or gossipy (shame on you, New York Post!) In case you haven't heard, at the final preview of the show, a piece of scenery broke (nearly fell, broke a track, nearly killed three kids - depending on which "source" you read) causing the show to stop for about 20 minutes. The consistent things about this mishap included John Stamos getting fellow Full House-r Bob Saget to join him on stage for some impromptu fun and Q & A, with Gina Gershon gamely chiding the duo for not being funnier, and even bringing out a signed poster of Stamos back in his 80's hey day. Bill Irwin contributed to the fun by giving the audience some of his clowning routine - he is a brilliant clown. I wish I had been there.

Those unscripted moments are what most of us real theatre fans live for. Those moments we can say we saw and know that they will never play out that way again. I don't include painful or harmful mishaps - when a piece of scenery fell and hit an actor into the pit at a preview of Shogun: The Musical, it was not funny at all. 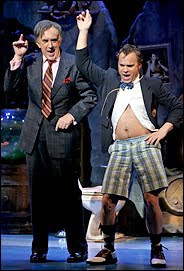 One of my favorite such moments, though, does include a little blood. It was a Saturday evening performance of Dirty Rotten Scoundrels and we were well into the show, maybe even Act Two. Anyway, Andre (Gregory Jbara) has literally swept Muriel (understudy Rachel deBenedet) off her feet, and is about to exit through the upstage hotel doors. Unfortunately for Mr. J, his finger got caught in the door, causing a cut that was actually dripping onstage. He started laughing about it... Miss dB started laughing about it, and he stopped the show. A trouper, he tried to go on, but had to stop to get a bandage and to stop the drip. While a bleeding Jbara paced the stage waiting for some first aid, Jonathan Pryce couldn't help but get in on the fun. Dressed as a doctor for the next scene, out he comes, saying, "I'm not a doctor, but I play one in this show!" Verbal banter ensues and out pops the not-to-be-outdone Norbert Leo Butz who ads to the mayhem. A good ten minutes later, all is fixed, the stage is cleared of everyone but Jbara and deBenedet who look at each other trying to decide where to start from, they both start laughing again, the audience goes wild, and he picks her up and carries her out the door without another cut. The audience again goes wild!