Making changes to shows during previews and out-of-town tryouts is part of the "bring it to Broadway" process. During that time, scenes may be changed, moved or deleted, whole design concepts may be scrapped, new songs in, old ones left for another show. In extreme cases, people get fired - actors that don't fit the role or vision of the director, directors who don't have a vision or temperament that matches the producers' desires, designers who just can't produce.
But I am always interested in shows that open, are a hit, and the creative team cares so much about the work that in the days, months and even years later, make changes to a proven piece. 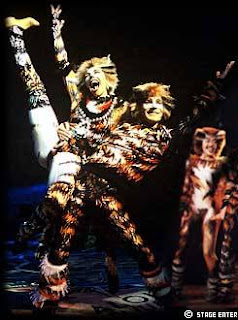 In the 80's, two big examples of such changes happened with two of the decade's (history's) biggest musicals: Cats and Les Miserables. Cats made some changes between London and here - "Mungojerrie and Rumpleteazer" changed characters, for example. But well after it opened, the Gus the Theatre Cat sequence was changed completely. Les Miz's change happened years into its run, and in fact it might not have been until the early nineties, but that show was changed enough that they shaved off more than 20 minutes of the show! Little nips and tucks that many audience members didn't even notice, I'm sure. The reason for the former change had more to do, I'm told, with difficulties hiring opera types who were willing to do feline drag; the latter was completely economic. At the opening of Les Miz, if the show didn't start precisely on time, the entire company had to be paid overtime for more than an hour. After awhile, even the hottest shows feel that economic pinch. 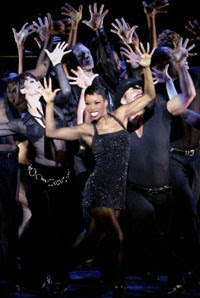 If a show runs long enough, performers and the times themselves change. Chicago, notorious for big name cast changes, also has been known to adjust the choreography for certain headliners who don't have the chops to do it all a la Fosse, but have the box office draw to fill the seats... Melanie Griffith, anyone? The recently departed and resurrected Avenue Q has changed some of the dialogue and lyrics to "Mix Tape," updating it to "Mix CD" as tapes are passe.
Wicked fans know that the opening sequence that you see today at the Gershwin Theatre, is not the same that opening night audiences saw. In re-creating the staging for touring purposes, the creatives scrapped the staging of the opening moments of "No One Mourns the Wicked" because not every venue could accommodate the technical needs of it. The change had to be made, and after having seen it, it was decided that artistically, those changes made the opening stronger and they were implemented in the Broadway production as well. 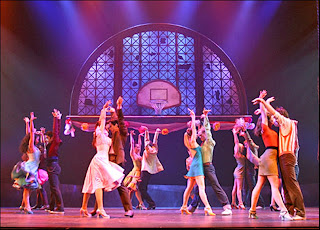 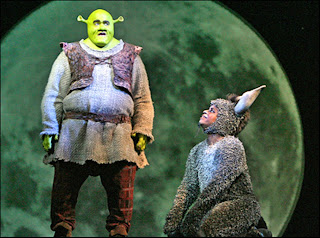 Most recently, two shows have announced changes: West Side Story and Shrek: the Musical. Considering the hoopla and artistic posturing surrounding the choice to do whole segments and songs entirely in Spanish for West Side Story, I was somewhat surprised to find out that the decision was made to revert much of it back to English. The Spanish worked for me, but a lot of my friends took exception to it - not because they didn't understand why, but because they didn't know enough Spanish to even follow the scenes. I think this change is remarkable because I know that author/director Arthur Laurents wanted this change to his own masterpiece very badly, so as to fit his grittier staging. It takes a big man, especially that big, to allow that the idea might not work as well as he thought. I think it also remarkable because it just proves that the "powers that be" do actually listen to the audience. With Shrek, I;m surprised that they are adding "I'm a Believer" to the sung score. It makes sense - they play it as the audience departs anyway. But it also makes "future sense," just like the West Side changes. Both shows are poised to go out on the road. These changes should play very well in middle-America.