Logos: Too Good, Too Late

Lately, as those of you who follow this blog know, I’ve been a little obsessive about show logos and advertising artwork. I tend to get on one topic and keep at it. Well, this will probably be the last logo blog for awhile – or until I finally take a closer look at the new Ragtime stuff. 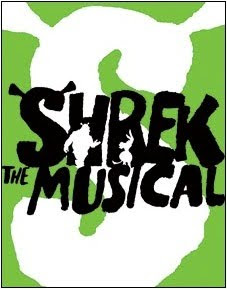 Today, with the sad but unsurprising news that Shrek will finally, I mean will be closing in January, I thought we might take a look at one possible reason why it never really took off. There are plenty of things to blame, and all of them probably have something to do with the success/failure of Shrek: The Musical: the economy (OK, that’s an easy fallback, until you consider how many shows are still recouping, not to mention the amazing offers they gave just to get butts in the seats), the though that only Disney can recreate animated films onstage (possibly, but the Mouse House has had its share of short runs…Tarzan, anyone?), maybe people are weary of Shrek (three films are out there, and this show hews pretty close to the first one, which is years old), or maybe it, like most shows, needed to have STRONG word-of-mouth, nudged along by a savvy marketing plan. I’d venture it is all of the above and more. But let’s look at the first thing an audience sees about a new play… the advertising.

I wonder just who the target audience is/was for Shrek. I believe that the films which most potential ticket buyers know aren’t really for the littlest little ones, making Shrek the perfect show to start a teenager (especially boys) out with. A farting ogre, princess and donkey alone would get the kid into it, plus he/she’d be able to understand the jokes about fairy tales AND the slightly naughty adult jokes. Was it marketed this way? Hmmm, the original tagline was “Bringing Ugly Back,” and obvious play on Justin Timberlake’s “Bringing Sexy Back.” Right audience, bad timing… that song was off the charts and out of mind by a year at least before the first poster went up. For teens old equals “I’m not interested.” Was it geared toward a younger audience? In a show ripe with familiar characters, the merchandise was decidedly against small kids… no Fiona doll, no stuffed Shrek… best leave that to Disney, the powers that be probably decided.

Then there was the original logo, a giant scribbly-looking “S” with ogre antlers (?), white set against an ugly hue of green, used much more successfully in Broadway’s OTHER fairy tale twist musical, Wicked. When the cleverest thing about the logo is that Shrek and Donkey’s silhouette is carved out of the title, you are in trouble. 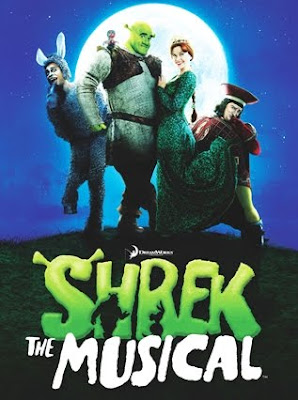 Not too long later, but apparently also way too long into the run, the advertising changed, with very colorful (and dare I say it, NOT ugly) photos of the main cast. Now potential ticket buyers could see that, in fact, Disney doesn’t corner the market on creating look-a-like yet original takes on animated characters. And they picked the cleverest of a small set of potential positive quotes from critics to top the posters and bus ads – a play on “once upon a time, far, far away…” This, friends, would have sold me, and gotten me beyond mildly interested; it is really something for everyone (fans of the film, lovers of high production values in Broadway musicals, and a glimpse of how clever the show could be).

I’ll admit that I saw Shrek while the logo was still ugly, but more out of being a “completist” than a Shrek fan. My goal every season is to see every new musical, and as many revivals as I can stand (last year, I missed Pal Joey; this year it’ll likely be Finian’s Rainbow, Cheyenne Jackson or not). But for me, the ugly logo could have only helped the show’s chances in my mind, because I went in with even fewer expectations. The result? I was bowled over by the sets, costumes, Sutton Foster and Daniel Breaker. I was underwhelmed by the book, the score and Brian d’Arcy James.

Which leads me to what ultimately always makes or breaks the long-term success or failure of a show: if the book and score aren’t good, you hardly ever end up loving the show and recommending it to others. That is where Shrek: The Musical really brought the ugly back.
Posted by JK at 8:19 PM