OK, so it looks like I might have to eat at least some of my own words. I am not, nor have I ever been a fan of The Phantom of the Opera. I can appreciate it – the spectacle, the talent, but I, in general, find it dull, melodramatic in the worst ways and too, well, “opera-y.” But I must confess that as more is revealed about its sequel, Love Never Dies, the more interested I become.

Go to loveneverdies.com and get an eye-full. In a press conference/news release today, Andrew Lloyd Webber made several key announcements regarding the show, most of which are old news, but when put all together, the package seems very appealing: 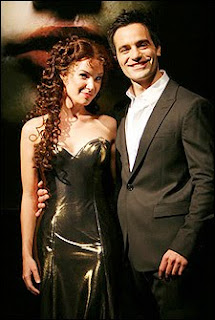 The Team – Jack O’Brien (direction) and Jerry Mitchell (choreography) by the virtue of who they are should be creating a piece that is decidedly different (but smart enough to connect the two pieces) from that of Harold Prince. Not that I expect Love Never Dies to resemble Hairspray in any way, but their hire certainly sends a creative message that Love Never Dies will NOT be a clone of its predecessor.

The Stars – the lovely and NOT Sarah Brightman-annoying Sierra Boggess, most recently seen in The Little Mermaid (I thought she was wonderful in a crappy show), will be Christine, and the extremely sexy Ramin Karimloo will be the Phantom. Both have played the roles in the original and both to much critical acclaim. If they can muster as much sexy chemistry as their pictures suggest, WOW! (Of course, I am assuming that this duo will create these roles on both the West End and Broadway. Everything I’ve seen about this implies as much.) 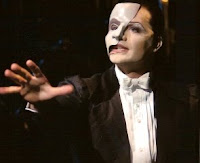 The Music – “The Coney Island Waltz,” a free download at the website when you sign up for the email list, reminds me of a turn of the last century grandeur and mystery mixed with my favorite Lloyd Webber show, Sunset Boulevard. And while the song, “Till I Hear You Sing Once More” is very Phantom-esque, it could serve as a wonderful bridge between the two shows, and you have to admit the dapper Mr. Karimloo sings the hell out of the song.

And so the countdown begins: 400 days until Love Never Dies starts in New York!

What are your thoughts? Excited? Hate it already? Wait and see?
Jeff