When the Logo is Better Than the Show

Recently, I've been blogging about show icons/logos. I figure that I (and any of you who read my stuff) are theater consumers and by virtue of that, I am entitled to share my opinion. And so are you, so please add comments below!

I hate to kick a show when it is down, but today's entry is about poor Bye Bye Birdie. But in keeping with the theme of recent entries, the logo/advertising for the show makes an interesting point. It holds the promise of a show that doesn't exist - it is better than the show it represents. 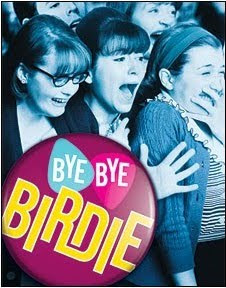 As I suggested in my review, the show is a confused mess without a point of view. But the logo certainly suggests a clearer vision. On first glance, you can immediately tell that the show takes place in a bygone era - the style of the hair on the screaming kids, the glasses, the dress. The tint of the picture also suggests the era of black and white TV, calling to mind the pivotal Ed Sullivan Show, which plays a large part in BBB. But the bluish tint also suggests a slightly more modern tone, as does the "fan button" title. Bright and colorful with 50's style shapes in the design, but very crisp and clear in a modern way.

For me, the entire logo represents a classic show about the American hysteria over celebrity, something which has not only been around long before Bye Bye Birdie, but has really gotten out of hand in contemporary society. The MacAfees get a does of fame by being on The Ed Sullivan Show. How is that different than today's American Idol, So You Think You Can Dance, and any number of reality shows? Looking at that logo, I was hoping for a show that paid homage to the classic original through a modern consciousness. I was disappointed. I wasn't the only one, apparently.
Posted by JK at 9:20 PM