When the Logo is Just Right: Memphis

Memphis week continues (even if it is unintentional) with a look at the other thing I’ve obsessed over this week: logos. In the case of Memphis, the title part of the logo works as well by itself as the whole thing does, including the artwork.

Long before I saw it, I saw the first logo, “Memphis” in faux-neon lights with an old-fashioned radio dial across the top, and was instantly attracted to the sign. Maybe it was the colors – vivid red and blue against black. Maybe it was the look of the neon. I think, actually, it was both, plus the taglines: “His vision. Her voice. The birth of rock and roll.” Then, too, it was just as likely to be those four magic words that thrill all theatre fans: “A New Broadway Musical.”

Plus the logo looks really cool on a black t-shirt! 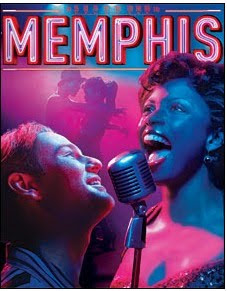 Then there is the artwork that goes with the logo. It tells the story (if you’ve seen it, you understand how) and it evokes the mood of the entire piece (if you haven’t seen it). Kudos to the advertising people who serve this show!

The picture itself is in hues of red and blue, both of which bring to mind such things as passion, danger, coolness, fire…all at once. Then, it becomes apparent that the red is a spotlight on an otherwise blue-lit scene. In the haze of the nightclub, one can make out a pair of sensual dancers, swaying to the sounds of the energetic black woman (Montego Glover) at the old-fashioned microphone. It is clear from her face that she loves to sing. And it is clear from the sweat-beaded face of the smiling white man (Chad Kimball)who is staring at her that he loves her music, and, more provocatively, he loves the woman herself. The nightclub, the radio dial, the microphone, the white man, the black woman, the sensual dancers, the musical passion, the colors, the haze: these things ARE Memphis.

What logos/artwork really gets you excited about a show? Add a comment!
Jeff

(Memphis marketing: Type A Marketing; photo in logo by Jason Bell)
Posted by JK at 3:34 PM