The end of the week column is back! I won't be doing "Bits and Pieces" any week where there is a show that opens Thursday and I've seen it. That review will appear in its place.

How unfortunate that the Broadway community was in the news for two rather unpleasant things this week:

Bye Bye Birdie star John Stamos admits that he went to an Australian TV interview drunk in 2007. Let’s hope that was an isolated case. Drunk at the workplace is a definite sign of a problem. And the “spin” his publicists out on it…

A Broadway stage manager was arrested for suspicion of video taping a woman’s dressing room at the Lincoln Center production of South Pacific. What was he thinking? 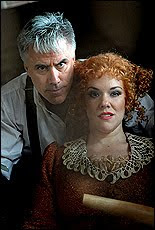 If there weren’t already a dozen reasons (?) to go to Oklahoma, now there are three: Sweeney Todd, Jeff McCarthy and Emily Skinner! The announcement of this casting makes me very excited. I wish I could get down there to see them. The two were excellent and had amazing chemistry in Side Show. And look at this publicity shot! I love Emily’s expression!

I hate to see any show close, but hopes were so high for Shrek: The Musical. Despite aggressive advertising campaigns (see my blog on this very subject tomorrow) and substantial ticket discounts, not to mention a grade “a” cast, the show never really found its footing. Many people, myself included, were surprised it lasted this long.

I mean, I liked it, I’m glad I saw it, but I had no desire to return. I rarely listen to the CD. I found it to be a little “too much.” The production itself was lovely…it looked expensive; but people the caliber of Sutton Foster, Daniel Breaker and Christopher Seiber shouldn’t have to work that hard to sell a show. And I think Brian d’Arcy James, an otherwise brilliant actor, gave a monotone performance underneath all that lime green foam.

Despite fairly poor reviews, it was announced almost immediately that the revival of Bye Bye Birdie was extending through April 25th. Good news for the cast. I wonder how well it will sell, once it gets past the Roundabout subscriber weeks. Not my cup of tea (see my review from October 16), I’m sure that if you must go, you’ll be able to get decent discounts online.