This review is based on seeing a preview of Bye Bye Birdie nearly three weeks ago. My original disclaimer would have said to temper my comments with the understanding that much had probably been done to improve the show in the following weeks. However, it seems that the critics and I saw the same show, anyway. So here goes...
The Concept: Considering the heaps of talent assembled for the first-ever revival of the classic musical Bye Bye Birdie, what opened this week at the fabulously refurbished Henry Miller's Theatre should have been a successful hit of Wicked proportions. I mean not even counting the classic score and book by Lee Adams, Charles Strouse and Michael Stewart, respectively, the cast alone is epic: TV stars, movie stars, Broadway stars, Broadway babies, Tony nominees, Tony winners... not to mention the director of one of the greatest cult musicals ever, Side Show. But I guess this is a glaring example of chemistry that simply is not there. Everyone in it seems to be in a different show. Some are giving it the old razzle dazzle, some are playing it straight as an arrow, and still others are playing it like a Shakespearean comedy, which is to say it is a tragedy. 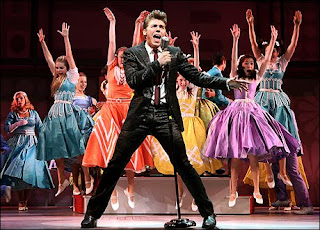 Putting on a revival of a beloved classic like Birdie is probably not as easy as it seems. After all, you are battling audiences who want to relive the show they did in high school or community theatre, while musical buffs want to see either a loving recreation (South Pacific) or a dazzling new take on a an old chestnut (again, South Pacific). Of course, in order to do either, you have to make some decisions: Are we going nostalgic, recreating the real feel of the 50's, acting styles and all? Are we doing broad comedy? Are we doing the show straight is if this were the 50's and the audience and characters are contemporary? Or are we going to find something fresh here, along the lines of the American culture being celebrity obsessed then and now? Well,what is currently showing at Roundabout Theater Company is a confusing mess of all of the above, and even of more concern, none of the above. And that is the fault of the director, Robert Longbottom.

Direction, Choreography and Technical Aspects: Longbottom's scenes don't flow, despite the best efforts of scenic designer Andrew Jackness' TWO conveyor belts. Scene to scene plays like separate little shows, never adding up to a cohesive whole. And Longbottom's choreography looks great, and you get the sense that the big numbers are building to a frenzy (particularly act two's "Whole Lotta Livin' to Do"). And despite the concerted efforts of everyone to be in perfect unison and smiling til it hurts, the final effect of each and every number is greeted with decreasingly enthusiastic applause (I have to interject here. The audience I attended with was one of those that you could feel from the very start was wanting this show to be SO AMAZING. But by the end, we were polite and little more. Standing ovation -crazed New Yorkers stayed in their seats as a visibly beaten cast took their bows).

The rest of Mr. Jackness' sets are certainly colorful - and nicely put against a mostly grey backdrop of shapes and set pieces. But again, like the show itself, the scenery seems to be taken from any number of shows and thrown together. The sleek, if oddly wheel less, train looks ultra modern, and the Plexiglas squares/cubes that line the sides and back combine to give that 50's looking to the 21st century design/feel. But then there is that troubling computer generated backdrop that certainly wipes away any nostalgia built up to this point. Rather than adding to the show, it comes across more like the designer got a new toy and gosh darn it, he's gonna make use of it no matter what!

Tony winners Gregg Barnes (costumes) and Ken Billington (lighting) at least seem to be on the same technicolor of the 50's page. The costumes are spot on in style like Mad Men, but cute and fun like a fond memory of days gone by, too. I loved how everything in New York was gray, black and white, while everything in Sweet Apple, Ohio is a rainbow of color-coded families, all with husband, wife and 2.5 children. The lighting is equally effective - moody when it needs to be, heightened and colorful other times. Best of all, you notice it, but it doesn't intrude. 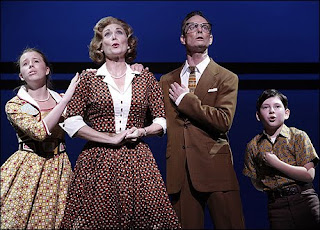 The Cast: I don't think anyone was more excited than I was when the cast was announced for this show... I mean when you can get someone the caliber of Dee Hoty to play what is little more than a walk on role, there must be something big coming. But you know a whole show is in trouble when an actress the caliber of Dee Hoty is reduced to a tiny bit of shtick in order to make her character memorable. Heck, she even does it at the curtain call lest we forget that she is the biggest Sweet Apple housewife in the cast!

Bill Irwin is trying so hard you just want to hug him and say, "thank you." But the mugging and over the top clowning, at which he is an expert, is directly at odds with the rest of the show. The audience, grateful for the effort, rewards him generously throughout, but his performance does not fit. And to be blunt, the man can't sing, not even the talk-song, "Kids." He missed every single entrance by at least a beat in the entire song.

Nolan Gerard Funk as Birdie is neither smooth enough to be believed as a heart throb, nor rebel enough to be believed as the beer drinking slob he is "offstage." And, at least at the preview I attended, he could not make any of the money notes in his songs. But I'll give him credit for even doing it, but he is saddled with the most uncomfortable 2 minutes seen on any stage in New York at this time. He comes out in tightie whites and socks (that's it, with a not so chiseled look, either) crosses in front of a room full of people, including a small boy, a proper housewife and teenage girl who is allegedly in love with him, and drinks down a can of beer only to (naturally) belch loudly. I assume this is to satisfy the horny tweens in the house, the gay men with twink fettishes and to get a gross-factor laugh. It got literally no reaction. Not even a nervous chuckle. Why? It made no sense. No one would have done that in front of those kids, and if they did, the girl would have passed out and probably the mother, too. Then there is Matt Doyle, underwhelming here as he was in Spring Awakening. And sorry, Hugo just isn't that pristine. 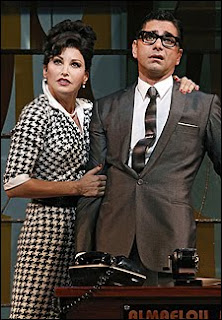 All the naysayers about John Stamos and Gina Gershon apparently did not see them in Cabaret. I did and both were among the very best of all the Emcees and Sallys going. His performance then was so shocking and against type, and she was nothing less than a brilliant mess of emotional baggage. Maybe there just isn't enough in BBB for these actors to chew on. Neither seemed particularly comfortable, and both seemed rather "put on" at times. His Albert was way too weak, I think, to keep spitfire Rosie interested. And her Rosie is too strong to put up with his mother, an amazingly one note performance - and a dull, flat one at that - by Jane Houdyshell. Worst of all, neither Mr. Stamos nor Ms. Gershon seemed prepared with most of the music, though contrary to reports, she seemed to struggle less with the score than he did. Stamos literally ran out of steam and breath during the un-dancey "Put on a Happy Face," while Ms. Gershon seemed afraid of, and eventually cracked on, the upper notes in "An English Teacher." Lack of confidence is written all over her performance, while he simply does not register much at all. But I think Ms. Gershon, once free to just do the show will grow and be quite good. Why you might ask? Because she delivers the lone highlight of the show, the very difficult to sing/dance/act simultaneously, "Spanish Rose." If she can do that, the rest of the show should be a piece of cake. 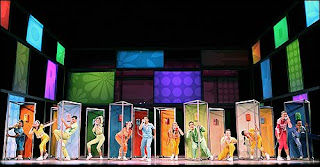 Finally, much has been made in the press about the fact that they used "real teenagers" in the ensemble. Really? So what? They range from decent (Paul Pilcz as Harvey Johnson) to mediocre (everyone else) to sadly miscast (Brynn Williams as Ursula). Learn to use a phone with a chord (spelling intended), kids! Learn more than one expression beyond shock or adoration. And Ursula is a "screaming, howling beast" right? Then how about a scream? What are you saving it for, Miss Williams? As if to save the whole hire a teen to play a teen notion, the brightest spot (BY FAR) of the entire show is Miss Allie Trimm as Kim. As dazzling as she was (again a standout in a mediocre field) in last year's 13, Miss Trimm is a breath of fresh air, a bold confident creature in an unsure world around her...oh, and she can act and sing with a sincerity that will break your heart and yearn for the good old days when nice girls didn't put out OR tease. She manages to find a balance between a nostalgic, stylized performance and a sincere reading of the part. No wonder then, that the very best part of the whole show comes at the end when she belts out the title tune and the cast joins in a frenzy of good fun and obvious enjoyment: the curtain call. You can tell they love doing it, and it does leave you with a positive buzz. Why, oh why couldn't this much fun have happened the 2 and half hours before?

Have you seen Birdie? What did you think?
Jeff
Posted by JK at 11:38 PM